Springer Mountain is a mountain located in the Chattahoochee National Forest on the border of Fannin and Gilmer counties. Located in the Blue Ridge Mountains in northern Georgia, the mountain has an elevation of about 3,782 feet (1,153 m). Springer Mountain serves as the southern terminus for the Appalachian and Benton MacKaye trails.

The origin of the name of Springer Mountain is unclear. One possible origin was that it was named in honor of William G. Springer, an early settler appointed in 1833 by Governor Wilson Lumpkin to implement legislation to improve conditions for the Indians. Another possibility was that Springer Mountain was named for the first Presbyterian minister to be ordained in Georgia, John Springer, who was ordained in 1790.

The mountain has been called Springer since at least 1910. As late as 1959, some residents of Gilmer County were still calling the peak Penitentiary Mountain. According to the Gilmer County Historical Society, the name was officially changed by the Georgia Appalachian Trail Club (GATC). It is unknown why the mountain was named Penitentiary. There is no known Cherokee name for the mountain.

The mountain is located about 17 miles (27 km) east of Ellijay, 14 miles (23 km) northwest of Dahlonega and 11 miles (18 km) southwest of Suches. Mount Oglethorpe, the original southern terminus of the Appalachian Trail, is located about 14 miles (23 km) south of Springer Mountain. Other nearby geographical features include Black Mountain, Tickanetley Creek and Winding Stair Gap. 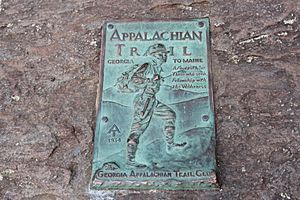 In addition to the Appalachian Trail, Springer Mountain can be reached from the south via the Appalachian Approach Trail. The approach trail starts at the visitor's center of Amicalola Falls State Park and is 8.5 miles (13.7 km) in length.

All content from Kiddle encyclopedia articles (including the article images and facts) can be freely used under Attribution-ShareAlike license, unless stated otherwise. Cite this article:
Springer Mountain Facts for Kids. Kiddle Encyclopedia.