The Coosawattee River is a 49.3-mile-long (79.3 km) river located in the northwestern Georgia, United States. 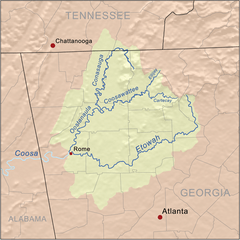 Map of the Coosa River headwaters, showing the Coosawattee River

In Murray County, the river is impounded by Carters Dam, forming Carters Lake behind the dam. (The lake is located mostly in Gilmer County). Completed in 1977, Carters Dam is the tallest earthen dam east of the Mississippi River. The Coosawattee River leaves the dam flowing west (directly into the Reregulation Reservoir). It serves as the Murray-Gordon County line before entering Gordon County.

Near New Echota, a late capital of the Cherokee Nation (1794-1907) before removal in 1838, the Coosawattee meets the Conasauga River. They form the Oostanaula River, a tributary of the Coosa River.

This area was the center of Cherokee Nation territory in north Georgia and southeastern Tennessee. In the early 1820s, after having migrated from eastern Tennessee after being forced by the United States to cede their lands there, they made New Echota their capital.

American writer James Dickey used the Coosawattee River as the basis of his fictional "Cahulawassee River" in his debut novel, Deliverance (1970). It was adapted as a 1972 feature film of the same name, directed by John Boorman.

All content from Kiddle encyclopedia articles (including the article images and facts) can be freely used under Attribution-ShareAlike license, unless stated otherwise. Cite this article:
Coosawattee River Facts for Kids. Kiddle Encyclopedia.