Carters Lake, is a reservoir located on the Coosawattee River in the Blue Ridge Mountains in Gilmer and Murray counties in Georgia, United States, and is the state's deepest lake.

While the reservoir is on the Coosawattee River, it empties directly into the Regulation Reservoir (another reservoir on the river). The reservoir was named after Farrish Carter who lived in the 19th century. It has a surface area of 3,200 acres (13 km2) and has 62 miles (100 km) of shoreline. Carters Lake has an average depth of 200 feet (61 m) and a maximum depth of 450 feet (140 m). 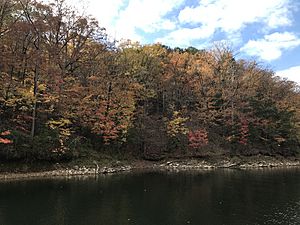 Carters Lake, owned by the US Army Corps of Engineers, is a man-made lake without private docks or houses along its shore. This lake is fed by the Coosawattee River that runs between Ellijay and Chatsworth, and was formed by Carters Dam, the tallest earthen dam east of the Mississippi, which was completed in 1977. Since then, it has been used to act as a watershed to control annual flooding and generate power. Carters Lake is also used for various forms of outdoor recreation such as fishing, water skiing, hiking, camping, and mountain biking.

The lake served as inspiration for the wild river that was tamed by a dam in the novel and film Deliverance by James Dickey. 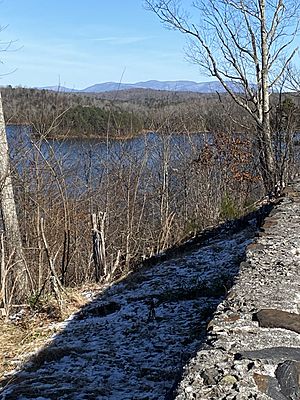 All content from Kiddle encyclopedia articles (including the article images and facts) can be freely used under Attribution-ShareAlike license, unless stated otherwise. Cite this article:
Carters Lake (Blue Ridge Mountains) Facts for Kids. Kiddle Encyclopedia.