The Chestatee River (variant spellings Chestatie, Chestetee, Chostatee, Chosteta, Chestotee; none in modern use) is a 32.76-mile-long (52.72 km) river in the Appalachian Mountains of northern Georgia, USA.

The word "Chestatee" is a Cherokee word meaning roughly "pine torch place" or "place of lights", because they would use bonfires along the riverbanks to light their torches. They would then use these torches for hunting deer and other wild game in the forest. The Chestatee Regional Library System takes its name from the river, as do Chestatee High School and Middle School in Gainesville. In a nod to the origins of the name, CHS strives to be "a place of light" to their students. 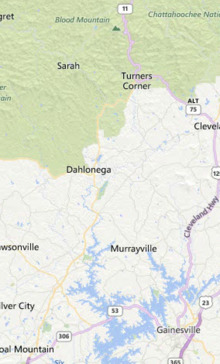 Map showing the Chestatee River area, with its source near Blood Mountain, running south near Turners Corner and through Dahlonega, and flowing into Lake Lanier at the southern part of the map. 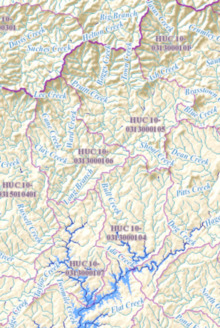 It begins at the confluence of Dicks Creek and Frogtown Creek (near the junction of U.S. 19 and U.S. 129) in northeastern Lumpkin County, flowing down by the county seat and former Georgia Gold Rush town of Dahlonega, and then under the northern terminus of the Georgia 400 expressway from Atlanta. It originally continued past the southern corner of the county, forming the entire eastern border of southern Dawson County with northwestern Hall County, and the far northern part of Forsyth's border with Hall. The river was used as a defining line in the Cherokee Treaty of Washington 1819 and the eastern border of the Hickory Log District of the Cherokee Nation before removal

It is a major tributary of the Chattahoochee River, into which it ended at a point now under the waters of Lake Lanier, since Buford Dam was finished in 1956. The northwestern arm of the lake, which flooded the lower 18 miles (29 km) of the river, is called Chestatee Bay, which destroyed the town of Chestatee (called Atsunsta Ti Yi by the native Cherokee people) when it was submerged. The county boundaries still follow the original thalwegs of the river, with the lake coming as far up the river as Lumpkin's southernmost tip. At this point, the river forms an extremely small portion of the Lumpkin/Hall county line for about 1 mile (1.6 km).

All content from Kiddle encyclopedia articles (including the article images and facts) can be freely used under Attribution-ShareAlike license, unless stated otherwise. Cite this article:
Chestatee River Facts for Kids. Kiddle Encyclopedia.