Kids Encyclopedia Facts
Not to be confused with Forsyth, Georgia.

Forsyth County's rapid population growth can be attributed to its proximity to high-income employment opportunities in nearby Alpharetta and northern Fulton County, its equidistant location between the big-city amenities of bustling Atlanta and the recreation offerings of the scenic Blue Ridge Mountains, its plentiful supply of large, relatively affordable new-construction homes, and its highly ranked public school system. The influx of high-income professionals and their families has increased the county's median annual household income dramatically in recent years; at $104,687, Forsyth County was the wealthiest in Georgia and the 19th-wealthiest in the United States as of 2018 estimates.

In the 1980s, the county attracted national media attention as the site of large civil rights demonstrations and counter-demonstrations. Organizers hoped to dispel the county's image as a conservative and hate-filled sundown town; African Americans were unjustly forced out in 1912 and the county had a reputation of being hostile to people of color and LGBT people for many decades since. Thousands of marchers on both sides came from outside the area; officials kept peace with police officers and National Guard protecting the event.

From 2007 to 2009, the county received national attention because of a severe drought. Water supplies for the Atlanta area and downstream areas of Alabama and Florida were threatened. This followed a more severe drought in 2007 and 2008, and flooding in 2009. Flooding occurred in 2013, and severe drought again in 2016. Georgia, Alabama and Florida have been in a tri-state water dispute since 1990 over apportionment of water flow from Lake Lanier, which forms the eastern border of the county and is regulated by the Army Corps of Engineers as a federal project.

For thousands of years, varying indigenous cultures lived in this area along the Etowah River. Starting near the end of the first millennium, Mound Builders of the Mississippian culture settled in this area; they built earthwork mound structures at nearby Etowah in present-day Bartow County, and large communities along the Etowah River in neighboring Cherokee County. They disappeared about 1500CE, before European encounter.

Members of the Iroquoian-speaking Cherokee Nation migrated into the area from the North, possibly from the Great Lakes area. They settled in the territory that would become Forsyth County and throughout upper Georgia and Alabama, also having settlements or towns in present-day Tennessee and western North Carolina.

After the discovery of gold by European Americans in the surrounding area in 1829, numerous settlers moved into the area. They increased the pressure on the state and federal government to have the Cherokee and other Native Americans removed to west of the Mississippi River, in order to extinguish their land claims and make land available for purchase. The Cherokee were forced to relocate during what was called the Trail of Tears.

Forsyth County was named after John Forsyth, Governor of Georgia from 1827–1829 and Secretary of State under Presidents Andrew Jackson and Martin Van Buren. For many years, much of this hill country was farmed by yeomen farmers, who did not own many slaves.

The 2020 United States Census indicated that the county gained 43% in its population in the preceding decade. This was the largest percentage increase of any county in the state. 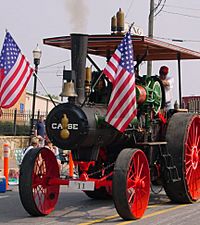 Lake Lanier, a 37,000-acre (150 km2) lake created and maintained by the United States Army Corps of Engineers in association with Buford Dam, is enjoyed by many residents and non-residents alike. Fishing, boating, tubing, wake boarding, and water skiing are common activities on the lake.

With only one officially incorporated city, the majority of Forsyth County citizens live in areas with zip codes assigned to cities in surrounding counties.

In addition, there are several unincorporated communities throughout the county.

An indicator that part of the county had reached the status of a mainstream suburban/exurban area and was starting to create new, positive history beyond its racist past, a mixed-use development Halcyon with residential, office, dining and entertainment facilities, opened in the southern part of the county near Alpharetta in summer 2019.

Forsyth County is served by Forsyth County Schools. FCS serves over 51,000 students and is the largest employer in the county with over 8000 full-time employees and substitutes. Out of 180 school districts, FCS is the seventh largest school system in Georgia. FCS is home to 41 schools – twenty-two elementary, eleven middle, seven high schools, and one college and career high school, as well as the Academies for Creative Education (A.C.E) that houses one school, iAchieve Virtual Academy, FCS' 6–12 online school, and two programs, Gateway Academy (the alternative program for middle and high school students) and Forsyth Academy.

All content from Kiddle encyclopedia articles (including the article images and facts) can be freely used under Attribution-ShareAlike license, unless stated otherwise. Cite this article:
Forsyth County, Georgia Facts for Kids. Kiddle Encyclopedia.