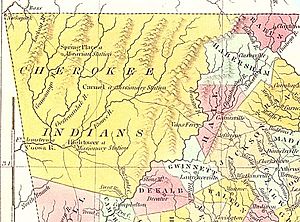 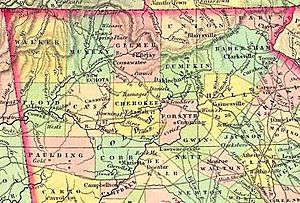 The Cherokee coexisted with white settlers until the discovery of gold in Georgia in 1828. Settlers that moved to the area to mine for gold pushed for the removal of the Cherokee. In 1835, the Treaty of New Echota was signed. The treaty stated that the Cherokee Nation must move to the Indian Territory, west of the Mississippi River. This resulted in the Trail of Tears. The Cherokee territory was then formed into Cherokee County in 1831. In 1832, the county was split into several counties including Forsyth County.