Sherman's March to the Sea facts for kids 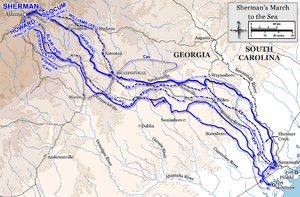 Sherman's March to the Sea is the name given to the military Savannah Campaign in the American Civil War. This was a march of troops through Georgia that lasted from November 15 to December 21, 1864. It was lead by Maj. Gen. William Tecumseh Sherman of the Union Army.

The campaign began with Sherman's troops leaving the captured city of Atlanta, Georgia, on November 15. It ended with the capture of the port of Savannah on December 21. His army burned military targets along with stores, other businesses, and the homes of the people who lived in their path. This ruined the Confederacy's economy and its means of travelling.

Sherman's plan of action of fighting deep inside enemy territory and without any extra supplies changed the way of thinking about how to fight a war.

All content from Kiddle encyclopedia articles (including the article images and facts) can be freely used under Attribution-ShareAlike license, unless stated otherwise. Cite this article:
Sherman's March to the Sea Facts for Kids. Kiddle Encyclopedia.