John Bell Hood (June 1 or June 29, 1831 – August 30, 1879) was a Confederate general during the American Civil War. Hood had a reputation for bravery and aggressiveness that sometimes bordered on recklessness. Arguably one of the best brigade and division commanders in the Confederate States Army.

Hood's education at the United States Military Academy led to a career as a junior officer in both the infantry and cavalry of the antebellum U.S. Army in California and Texas. At the start of the Civil War, he offered his services to his adopted state of Texas. He achieved his reputation for aggressive leadership as a brigade commander in the army of Robert E. Lee during the Seven Days Battles in 1862, after which he was promoted to division command. 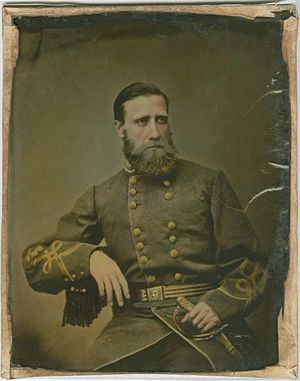 He led a division under James Longstreet in the campaigns of 1862–63. At the Battle of Gettysburg, he was severely wounded, rendering his left arm useless for the rest of his life. Transferred with many of Longstreet's troops to the Western Theater, Hood led a massive assault into a gap in the Union line at the Battle of Chickamauga, but was wounded again, requiring the amputation of his right leg.

Hood returned to field service during the Atlanta Campaign of 1864, and at the age of 33 was promoted to temporary full general and command of the Army of Tennessee at the outskirts of Atlanta, making him the youngest soldier on either side of the war to be given command of an army. There, he dissipated his army in a series of bold, calculated, but unfortunate assaults, and was forced to evacuate the besieged city.

Leading his men through Alabama and into Tennessee, his army was severely damaged in a massive frontal assault at the Battle of Franklin and he was decisively defeated at the Battle of Nashville by his former West Point instructor, Maj. Gen. George H. Thomas, after which he was relieved of command. 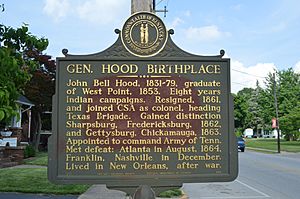 After the war, Hood moved to Louisiana and became a cotton broker and worked as president of the Life Association of America, an insurance business. In 1868, he married New Orleans native Anna Marie Hennen, with whom he had 11 children over 10 years, including three pairs of twins. He also served the community in numerous philanthropic endeavors, assisting in fund-raising for orphans, widows, and wounded soldiers.

During the postwar period, he began a memoir, Advance and Retreat: Personal Experiences in the United States and Confederate States Armies. Though rough, incomplete and not published until after his death, this work served to justify his actions, particularly in response to what he considered misleading or false accusations made by Joseph E. Johnston, and to unfavorable portrayals in William Tecumseh Sherman's memoirs.

His insurance business was ruined by a yellow fever epidemic in New Orleans during the winter of 1878–79. Then Hood himself succumbed to the disease, dying six days after his wife Anna succumbed and on the same day their eldest daughter Lydia died, leaving 10 destitute, orphaned young children. They received support for over twenty years from the Texas Brigade Association and were ultimately adopted by seven different families in Louisiana, Mississippi, Georgia, Kentucky, and New York.

All content from Kiddle encyclopedia articles (including the article images and facts) can be freely used under Attribution-ShareAlike license, unless stated otherwise. Cite this article:
John Bell Hood Facts for Kids. Kiddle Encyclopedia.