James Longstreet (January 8, 1821 – January 2, 1904) was one of the foremost Confederate generals of the American Civil War and the main junior ranking officer to General Robert E. Lee, who called him his "Old War Horse." He served under Lee as a corps commander for many of the famous battles fought by the Army of Northern Virginia.

After graduating from the United States Military Academy at West Point, Longstreet served in the Mexican–American War. He was wounded in the thigh at the Battle of Chapultepec, and afterward married his first wife, Louise Garland. Throughout the 1850s, he served on frontier duty in the American Southwest. In June 1861, Longstreet resigned his U.S. Army commission and joined the Confederate Army.

His final years were marked by poor health and partial deafness. In 1902 he suffered from severe rheumatism and was unable to stand for more than a few minutes at a time. He contracted pneumonia and died in Gainesville on January 2, 1904, six days before his 83rd birthday. Longstreet's remains are buried in Alta Vista Cemetery. He was one of only a few general officers from the Civil War to live into the 20th century. 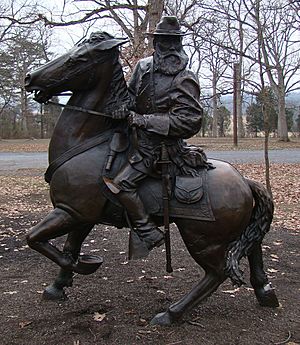 Longstreet is remembered through numerous places that bear his name in and around Gainesville, Georgia, including Longstreet Bridge, a portion of U.S. Route 129. In 1998, one of the last monuments erected at Gettysburg National Military Park was dedicated as a belated tribute to Longstreet. He is shown riding on a depiction of his favorite horse, Hero, at ground level in a grove of trees in Pitzer Woods, unlike most generals, who are elevated on tall bases overlooking the battlefield.

The Longstreet Society is an organization and museum in Gainesville, dedicated to the celebration and study of his life and career. The General Longstreet Recognition Project is an educational project aimed at broadening public awareness of Longstreet's military and public service.

Longstreet's Billet is the house in Russellville, Tennessee that was occupied by Longstreet in the winter of 1863–64, has been converted into The Longstreet Museum, which is open to the public.

All content from Kiddle encyclopedia articles (including the article images and facts) can be freely used under Attribution-ShareAlike license, unless stated otherwise. Cite this article:
James Longstreet Facts for Kids. Kiddle Encyclopedia.