The election of Abraham Lincoln (along with other reasons) caused seven Southern states, starting with South Carolina, to declare their secession from the United States. They formed the Confederate States of America by February 1861, before Lincoln took office.

Confederate forces took control of federal forts and customs houses within their boundaries of the South, mostly without a struggle. However, a few Union forts remained, including Fort Monroe (near Norfolk, Virginia), Fort Pickens in Florida, and Fort Sumter (near Charleston, South Carolina). 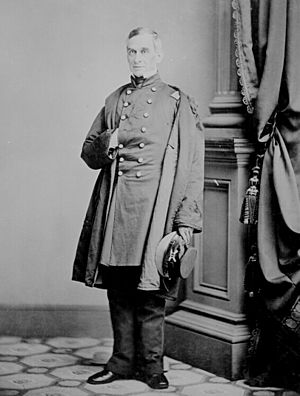 After South Carolina declared its secession from the United States on December 20, 1860, its authorities demanded that the U.S. Army abandon its forts in Charleston Harbor. The United States, not accepting the secession as legal, refused. On December 26, Major Robert Anderson of the U.S. Army secretly moved his small command from the weak Fort Moultrie on Sullivan's Island to Fort Sumter, a strong fortress built on an island controlling the entrance of Charleston Harbor. U.S. President James Buchanan tried to reinforce and resupply Major Anderson using the unarmed merchant ship Star of the West. The attempt failed when the ship was fired upon by Confederate shore batteries (a section of weapons on the shore) on January 9, 1861. South Carolina authorities then took all Federal property in the Charleston area except for Fort Sumter.

During the early months of 1861, the situation around Fort Sumter started to look more like a siege. In March, Brigadier General P. G. T. Beauregard, the first general officer of the newly formed Confederate States Army, was placed in command of Confederate forces in Charleston. Beauregard actively directed the strengthening of batteries around Charleston harbor that were aimed at Fort Sumter. The Union soldiers rushed to put more guns in Fort Sumter, but it was difficult because there were not enough men, food, or supplies. 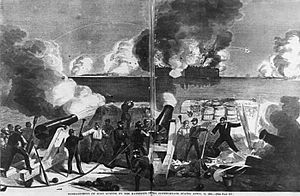 Bombardment of the Fort by the Confederates

President Abraham Lincoln, who had just been elected on November 6, 1860, faced a crisis when he took office. He needed to resupply Fort Sumter for the Union soldiers. President Lincoln told the Governor of South Carolina, Francis W. Pickens, that he was sending supply ships, which resulted in a demand from the Confederate government for the immediate evacuation of Fort Sumter. Major Anderson of the Union army refused. Beginning at 4:30 a.m. on April 12, the Confederates bombarded the fort from artillery batteries surrounding the harbor. Although the Union fort returned fire, they were badly outgunned and, after 34 hours, Major Anderson agreed to evacuate. There were no deaths on either side as a direct result of this battle. However, a gun explosion during the surrender ceremonies on April 14 caused two Union deaths. 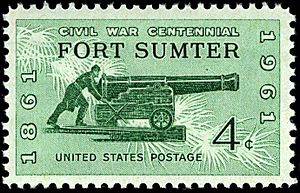 Following the battle, many in the North and South believed that more military action was necessary. Lincoln immediately called for 75,000 volunteers to crush the rebellion of the seceding Southern states. This resulted in an additional four Southern states also declaring their secession from the United States and joining the Confederacy.

The Battle of Fort Sumter is usually recognized as the first battle that opened the American Civil War.

On April 14, 1865, four years to the day after lowering it in surrender, Anderson (by then a major general) raised the Fort Sumter Flag again over the battered remains of the fort.

Interesting Facts About the Battle of Fort Sumter 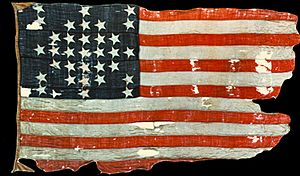 All content from Kiddle encyclopedia articles (including the article images and facts) can be freely used under Attribution-ShareAlike license, unless stated otherwise. Cite this article:
Battle of Fort Sumter Facts for Kids. Kiddle Encyclopedia.