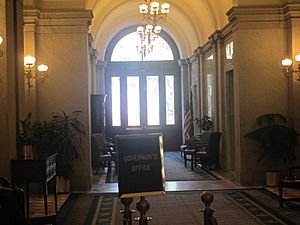 The 117th and current governor of South Carolina is Henry McMaster, who is serving his first elected term. He assumed the office on January 24, 2017, after Nikki Haley resigned to become the United States ambassador to the United Nations. He won the 2018 gubernatorial election.

There are three legal requirements set forth in Section 2 of Article IV of the South Carolina Constitution. (1) Be at least 30 years of age. (2) Citizen of the United States and a resident of South Carolina for 5 years preceding the day of election. The final requirement, (3) "No person shall be eligible to the office of Governor who denies the existence of the Supreme Being," is of extremely doubtful validity in light of the 1961 Supreme Court decision Torcaso v. Watkins, which reaffirmed that religious tests for public offices violated the Fourteenth Amendment to the United States Constitution. This requirement, however, has still not been removed from the Constitution of South Carolina.

If the incumbent governor is no longer able or permitted to fulfill the duties of the office of governor, the following line of succession will be followed:

If all three are unable to be governor, then the General Assembly will elect a new governor.

The Governor's Mansion, located at 800 Richland Street in Columbia, on Arsenal Hill, is the official residence of the Governor of South Carolina. It was built in 1855 and originally served as faculty quarters for The Arsenal Academy which together with the Citadel Academy in Charleston formed The South Carolina Military Academy (now The Citadel); The Arsenal was burned by Sherman's forces in February, 1865 and never reopened; the faculty quarters building was the only structure to survive and became the official residence of the governor in 1868. The South Carolina Constitution in Section 20 of Article IV requires that the governor is to reside where the General Assembly convenes.

The South Carolina Constitution of 1776 specified for the governor (known as the president) to be chosen by the General Assembly. In 1778, the constitution was amended to change the title for the chief of the executive branch from president to governor.

A new constitution was promulgated in 1865 following the capture of the state by the Union Army in the Civil War. It called for the direct election of the governor, but continued to limit the vote to white males. On October 18, 1865, James Lawrence Orr was the first Governor of South Carolina to be elected by popular vote.

Following the state's failure to adopt the 14th Amendment to the United States Constitution, the US Congress eliminated all offices of state government. A temporary military government headed by Edward Canby was set up until new elections were held after the writing of the Constitution of 1868. All male citizens above the age of 21, regardless of race, were given the right to vote and the governor was allowed to be elected to two consecutive terms.

The election of Ben Tillman in 1890 to governor by the support of agrarian reformers forced a new constitutional convention to be held. The constitution of 1895 instituted a poll tax and also required voters to pass a literacy test, conditions which were much later held to be unconstitional by the Supreme Court of the United States (and in the case of the poll tax, banned altogether by federal constitutional amendment It did increase the governor's powers by granting a line-item veto on the budget.

All content from Kiddle encyclopedia articles (including the article images and facts) can be freely used under Attribution-ShareAlike license, unless stated otherwise. Cite this article:
Governor of South Carolina Facts for Kids. Kiddle Encyclopedia.