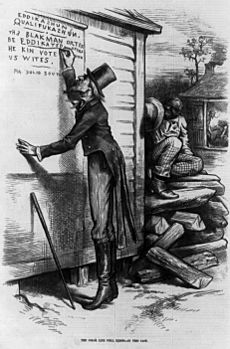 Editorial cartoon from the January 18, 1879, issue of Harper's Weekly criticizing the use of literacy tests. It shows "Mr. Solid South" writing on wall, "Eddikashun qualifukashun. The Blak man orter be eddikated afore he kin vote with us Wites, signed Mr. Solid South."

The literacy test was a test that the African Americans had to take to vote. They had to have some kind of knowledge of the United States and the test taker would ask how many states there were and how many senators were in each state. Then the African American would have to sit and take the literacy test while the white man only had to pay $1.50. This was another way the Jim Crow laws segregated or separated whites from blacks.

All content from Kiddle encyclopedia articles (including the article images and facts) can be freely used under Attribution-ShareAlike license, unless stated otherwise. Cite this article:
Literacy test Facts for Kids. Kiddle Encyclopedia.