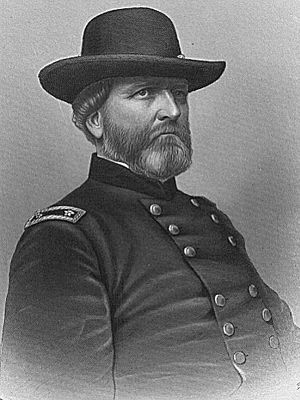 J. C. Buttre's 1877 engraving of Thomas, based on a photograph by George N. Bernard.

Thomas was born in Virginia in 1816. He graduated from the United States Military Academy in 1840. He fought in the Mexican-American War in an artillery battery. When the Civil War started, he decided to stay in the Union army instead of fighting for Virginia. He became a Brigadier General. He won a victory at the Battle of Mill Springs in Kentucky in 1861.

In 1862, he became a major general and commanded a corps in the Army of the Cumberland. He fought at the Battle of Stones River and the Battle of Chickamauga. He became commander of the Army of the Cumberland during the Chattanooga Campaign in 1863. He continued commanding the army during the Atlanta Campaign. When William T. Sherman started his March to the Sea, Thomas was left behind to defend Tennessee against John Bell Hood. Thomas defeated Hood at the Battle of Nashville in December 1864.

After the war, Thomas stayed with the U.S. army. He died in 1870 in San Francisco.

All content from Kiddle encyclopedia articles (including the article images and facts) can be freely used under Attribution-ShareAlike license, unless stated otherwise. Cite this article:
George Henry Thomas Facts for Kids. Kiddle Encyclopedia.