James Ewell Brown "Jeb" Stuart (February 6, 1833 – May 12, 1864) was a United States Army officer from the U.S. state of Virginia, who later became a Confederate States Army general during the American Civil War. He was known to his friends as "Jeb", from the initials of his given names. Stuart was a cavalry commander known for his mastery of reconnaissance and the use of cavalry in support of offensive operations. While he cultivated a cavalier image (red-lined gray cape, yellow sash, hat cocked to the side with an ostrich plume, red flower in his lapel, often sporting cologne), his serious work made him the trusted eyes and ears of Robert E. Lee's army and inspired Southern morale.

Stuart graduated from West Point in 1854, and served in Texas and Kansas with the U.S. Army. He was a veteran of the frontier conflicts with Native Americans and the violence of Bleeding Kansas, and he participated in the capture of John Brown at Harpers Ferry.

Stuart was commissioned as a lieutenant colonel of Virginia Infantry in the Confederate Army on May 10, 1861. Maj. Gen. Robert E. Lee, now commanding the armed forces of Virginia, ordered him to report to Colonel Thomas J. Jackson at Harper's Ferry. Jackson chose to ignore Stuart's infantry designation and assigned him on July 4 to command all the cavalry companies of the Army of the Shenandoah, organized as the 1st Virginia Cavalry Regiment. He was promoted to colonel on July 16.

He resigned when his home state of Virginia seceded to serve in the Confederate Army, first under Stonewall Jackson in the Shenandoah Valley, but then in increasingly important cavalry commands of the Army of Northern Virginia, playing a role in all of that army's campaigns until his death. He established a reputation as an audacious cavalry commander and on two occasions (during the Peninsula Campaign and the Maryland Campaign) circumnavigated the Union Army of the Potomac, bringing fame to himself and embarrassment to the North. At the Battle of Chancellorsville, he distinguished himself as a temporary commander of the wounded Stonewall Jackson's infantry corps.

Arguably Stuart's most famous campaign, Gettysburg, was marred when he was surprised by a Union cavalry attack at the Battle of Brandy Station and by his separation from Lee's army for an extended period, leaving Lee unaware of Union troop movements and contributing to the Confederate defeat at the Battle of Gettysburg. Stuart received significant criticism from the Southern press as well as the postbellum proponents of the Lost Cause movement, but historians have failed to agree on whether Stuart's exploit was entirely the fault of his judgment or simply a result of bad luck and Lee's less-than-explicit orders.

During the 1864 Overland Campaign, Union Maj. Gen. Philip Sheridan's cavalry launched an offensive to defeat Stuart, who was mortally wounded at the Battle of Yellow Tavern. Stuart's widow wore black for the rest of her life in remembrance of her deceased husband. 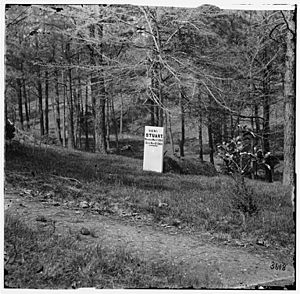 Like his intimate friend, Stonewall Jackson, General J.E.B. Stuart was a legendary figure and is considered one of the greatest cavalry commanders in American history. His friend from his federal army days, Union Maj. Gen. John Sedgwick, said that Stuart was "the greatest cavalry officer ever foaled in America." Jackson and Stuart, both of whom were killed in battle, had colorful public images, although the latter seems to have been more deliberately crafted. Jeffry D. Wert wrote about Stuart:

Stuart had been the Confederacy's knight-errant, the bold and dashing cavalier, attired in a resplendent uniform, plumed hat, and cape. Amid a slaughterhouse, he had embodied chivalry, clinging to the pageantry of a long-gone warrior. He crafted the image carefully, and the image befitted him. He saw himself as the Southern people envisaged him. They needed a knight; he needed to be that knight.

A statue of Stuart by sculptor Frederick Moynihan was dedicated on Richmond's Monument Avenue at Stuart Circle in 1907. Like General Stonewall Jackson, his equestrian statue faces north, indicating that he died in the war. In 1884 the town of Taylorsville, Virginia, was renamed Stuart. The British Army named two models of American-made World War II tanks, the M3 and M5, the Stuart tank in General Stuart's honor.

A high school on Munson's Hill in Falls Church, Virginia, opened in 1959, and a middle school in Jacksonville, Florida are named for him.

In December 2006, a personal Confederate battle flag, sewn by Flora Stuart, was sold in a Heritage Auction for a world-record price for any Confederate flag, for $956,000 (including buyer's premium). The 34-inch by 34-inch flag was hand-sewn for Stuart by Flora in 1862 and Stuart carried it into some of his most famous battles.

Stuart's birthplace, Laurel Hill, located in Patrick County, Virginia, was purchased by the J.E.B. Stuart Birthplace Preservation Trust, Inc., in 1992 to preserve and interpret it.

All content from Kiddle encyclopedia articles (including the article images and facts) can be freely used under Attribution-ShareAlike license, unless stated otherwise. Cite this article:
J.E.B. Stuart Facts for Kids. Kiddle Encyclopedia.