The Museum of the Confederacy

The Museum of the Confederacy was founded in 1894, 29 years after Lee's surrender in Appomattox. It is located in the historic home that served as the White House of the Confederacy, two blocks north of the Virginia State Capitol, which the Ladies Hollywood Memorial Association saved from destruction. It opened as the Confederate Museum and White House of the Confederacy in 1896, on February 22, the date of Jefferson Davis's inauguration. The historic home was named a National Historic Landmark in 1963 and Virginia Historic Landmark in 1966. A new building next door was built in 1976 to house the expanding collection (and a 12-year restoration of the historic home began). The museum maintains a collection of flags, weapons, documents, and personal effects related to the Confederacy, and offers tours of the home restored to its 1861–65 appearance. In 2006, museum officials announced that neither the museum nor the home would be moved.

The museum houses more than 15,000 documents and artifacts along with 500 original, wartime, battle flags from the Confederate States of America. Among the thousands of other important pieces found there are items owned by Jefferson Davis, Robert Edward Lee, Joseph E. Johnston, John Bell Hood, Thomas Jonathan Jackson, Simon Bolivar Buckner, J.E.B. Stuart, Joseph Wheeler, Wade Hampton, Lewis Armistead, and Raphael Semmes. The provisional Confederate Constitution and the Great Seal of the Confederacy are also housed there. 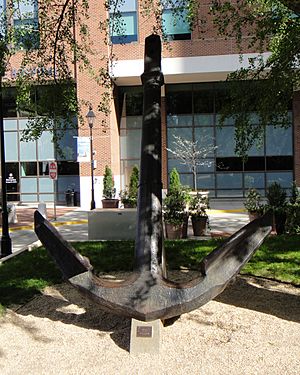 Anchor of the CSS Virginia

A newer building to better preserve and exhibit the museum's collections was built and opened in 1976 immediately adjacent to the White House, on its remaining 3⁄4-acre (3,000 m2) property. The anchor of the first ironclad warship, CSS Virginia, which fought the USS Monitor in the Battle of Hampton Roads on March 9, 1862, is prominently displayed in front of the museum.

The White House was closed in 1976, to be fully restored to its wartime appearance. The restoration project was completed in 1988, and reopened for public tours in June 1988. The White House featured extensive reproduction wall coverings and draperies, as well as significant numbers of original White House furnishings from the Civil War period.

Notable past and present exhibitions include: The Confederate Years: Battles, Leaders, and Soldiers, 1861–1865; Women in Mourning; Before Freedom Came: African-American Life in the Antebellum South; Embattled Emblem: The Army of Northern Virginia Battle Flag, 1861 – Present; A Woman's War: Southern Women, Civil War, and the Confederate Legacy; R. E. Lee: The Exhibition; The Confederate Navy; and Virginia and the Confederacy: A Quadricentennial Perspective.

By the centennial anniversary of the Civil War, the museum's governing board determined that it wanted to see the museum evolve from a shrine to a more modern museum. In 1963, the CMLS hired its first museum professional as executive director, and in 1970, changed the name of the institution to "The Museum of the Confederacy." Visitors peaked at 91,000 per year in the early 1990s but were down to around 51,000 in the early 2000s.

White House of the Confederacy 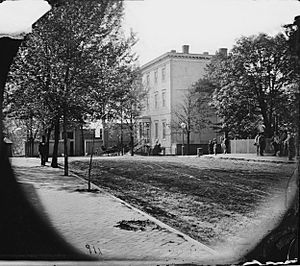 White House of the Confederacy, 1865, Library of Congress

The White House of the Confederacy is a gray stuccoed neoclassical mansion built in 1818 by John Brockenbrough, who was president of the Bank of Virginia. Designed by Robert Mills, Brockenbrough's private residence was built in early nineteenth century on East Clay Street in Richmond's affluent Shockoe Hill neighborhood (later known as the Court End District), and was two blocks north of the Virginia State Capitol.

President of the Confederate States of America Jefferson Davis, his wife Varina, and their children moved into the house in August 1861, and lived there for the remainder of the war. President Davis maintained an at-home office on the second floor of the White House due to his poor health.

The house was abandoned during the evacuation of Richmond on April 2, 1865. Within twelve hours, soldiers from Major General Godfrey Weitzel’s XVIII Corps seized the former Confederate White House, intact. During his tour of Richmond, President Abraham Lincoln visited Davis's former residence, and it was where Union officers held a number of meetings with local officials in the aftermath. During Reconstruction, the building served as part of the headquarters for Military District Number One (Virginia), and was occasionally used as the residence of the commanding officer of the Department of Virginia.

Following the end of Reconstruction, the House became a school -- the Richmond Central School. When the city announced its plans to demolish the building to make way for a more modern school building in 1890, the Confederate Memorial Literary Society was formed with the purpose of saving the White House from destruction. 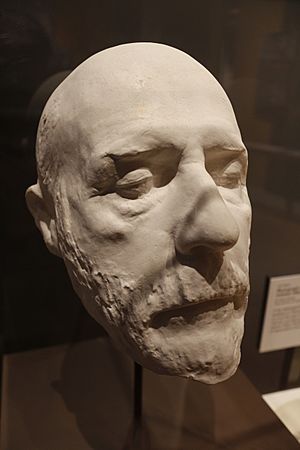 Death mask of Robert E. Lee, on display at the Appomattox museum

Opened in 2012 as the Museum of the Confederacy – Appomattox, in Appomattox, Virginia, adjacent to the Appomattox Court House National Historical Park, the American Civil War Museum – Appomattox tells the stories of the closing days of the Civil War, and the beginnings of our country's journey toward reuniting as Americans. The museum is situated on eight acres of land and contains 5,000 square feet for exhibits. The location changed its name in 2017 as part of the transition into the American Civil War Museum.

The museum plans to construct a major new building on the site of the historic Tredegar Iron Works in downtown Richmond. The new building will feature more than 7,000 square feet of new gallery space for permanent and changing exhibitions of items from the museum's renowned collections of Civil War artifacts, as well as an “immersion theater” highlighting Richmond's role in the war. The 8.9-acre site also will feature a new outdoor exhibit, living history demonstrations, and a new Family Resource Center, to be located in the historic Administration Building. Those projects also will include a reconfiguration of the site's landscaping, repair of the historic canal wall and leveling of the grounds on the site's upper level. The exhibit galleries at Historic Tredegar will remain open to the public throughout the outdoor construction, including the “In the Cause of Liberty” exhibit in the historic Foundry Building, and the Richmond National Battlefield Park Visitor Center, located in the historic Pattern Building. Completion is expected in 2019.

Several prominent Civil War historians have had connections to the museum. Douglas Southall Freeman, the biographer of George Washington and Robert E. Lee, started his career at the museum. Jack Davis, Emory M. Thomas, and Harvard University President Drew Gilpin Faust have all done research there. James I. Robertson Jr., of Virginia Tech, Edwin C. Bearss, Historian Emeritus of the National Park Service, and William J. Cooper Jr. of LSU, have each served as members of the museum's governing board.

All content from Kiddle encyclopedia articles (including the article images and facts) can be freely used under Attribution-ShareAlike license, unless stated otherwise. Cite this article:
American Civil War Museum Facts for Kids. Kiddle Encyclopedia.