President of the Confederate States of America facts for kids

Article II of the Confederate States Constitution vested the executive power of the Confederacy in the president. The power included the execution of law, alongside the responsibility of appointing executive, diplomatic, regulatory and judicial officers, and concluding treaties with foreign powers with the advice and consent of the senate. He was further empowered to grant reprieves and pardons, and convene and adjourn either or both houses of congress under extraordinary circumstances. 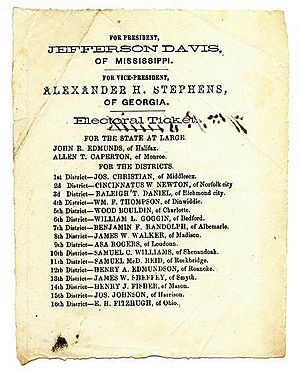 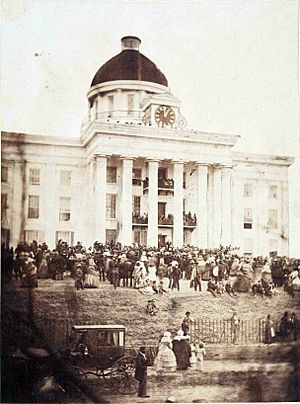 1861 Inauguration of Jefferson Davis at the Capitol, Montgomery, Alabama

On February 9, 1861, the provisional congress at Montgomery unanimously elected Jefferson Davis president and Alexander H. Stephens vice president. Stephens, who was a delegate to Congress from Georgia, was inaugurated on February 11. Davis was inaugurated on February 18 upon his arrival from Mississippi, where he had gone upon his resignation from the U.S. Senate. Davis and Stephens were elected on November 6, 1861, for six-years terms, as provided by the permanent constitution. The Capital had been moved in June 1861, to Richmond, and the inauguration took place at the statue of Washington, on the public square, on February 22, 1862.

Before Davis entered on the execution of his office as President of the Confederate States, he was constitutionally required to take the following oath or affirmation:

"I do solemnly swear (or affirm) that I will faithfully execute the office of President of the Confederate States, and will, to the best of my ability, preserve, protect, and defend the Constitution thereof."

In 1861, the President of the Confederate States earned a CS$25,000 annual salary, along with an expense account, and a nontaxable travel account. The President's Office was located on the second floor of the Custom House on Main Street, a structure which also housed the Cabinet Room and the State and Treasury Department. The City of Richmond purchased the Brockenbrough house for presentation to the Confederate government for use as an executive mansion. Davis declined to accept the gift, but the mansion was leased for his use. Referred to as the "White House of the Confederacy" or the "Grey House," the mansion was used by President Davis throughout the existence of his presidency. Later it became a repository for documents, relics, and pictures, and in 1896 it was redesignated the Confederate Museum.

Late on the evening of April 2, 1865, President Davis, his aides, and members of the Cabinet, except Secretary of War Breckinridge, departed from Richmond on the Richmond and Danville Railroad. The Cabinet stayed at Danville, 140 miles (225 km) southwest of Richmond, until April 10, when, hearing of Lee's surrender, it continued farther south. At Greensboro, North Carolina, on April 12 the Cabinet met with Generals Johnston and Beauregard and discussed surrender of Johnston's army to General Sherman. As the railroad south of Greensboro had been destroyed, the flight from that location was on horseback and in ambulances, wagons, and carriages. The last Cabinet meetings took place at Charlotte, on April 24, and 26, and on May 4; when Davis left Washington, Georgia, the party consisted only of his aides and Postmaster General Reagan. Elements of the United States Cavalry captured Davis and his companions at an encampment near Irwinville, May 10, 1865.

Jefferson Davis was imprisoned at Fort Monroe, Virginia, until his release on bail on May 13, 1867. During his confinement, the United States Government prepared to bring him to trial for treason and for complicity in the assassination of United States President Abraham Lincoln. He could not be tried in Virginia until the Federal court was reestablished there, but by the time the circuit judges were prepared in May 1867, the United States Government decided the outcome of a trial before a local jury was far too uncertain and dropped the proceedings. In November 1868, Davis was brought to trial under a new indictment, but the judges disagreed and the case was referred to the Supreme Court. President Johnson issued a general amnesty in December 1868 and the Supreme Court entered a nolle prosequi, thus freeing Davis.

All content from Kiddle encyclopedia articles (including the article images and facts) can be freely used under Attribution-ShareAlike license, unless stated otherwise. Cite this article:
President of the Confederate States of America Facts for Kids. Kiddle Encyclopedia.