The Bristoe Campaign was a series of minor battles fought in Virginia during October and November 1863, in the American Civil War. Major general George G. Meade, commanding the Union Army of the Potomac, began an unsuccessful attempt to defeat General Robert E. Lee's Army of Northern Virginia. Lee countered with a turning movement. Not willing to do battle on ground he did not choose, Meade gradually withdrew his army back toward Centreville. His object was to keep Lee from getting between his Union forces in Virginia and Washington, DC.

In September, Lee was forced to send his I Corps commanded by general James Longstreet to the Western Theatre around Chattanooga, Tennessee. Meade lost his Union XI and XII Corps who were also sent to Tennessee. Lee was left with about 55,000 men while Meade’s forces now numbered about 80,000. Meade was unhappy about having to give up two Corps and felt he did not have a large enough force to defeat Lee. Lee, however, proceeded with his plan for a turning movement, to get between Meade and Washington DC.

Early on the morning of October 9, the Confederates broke camp to try to move unnoticed around Meade's flank. They avoided hills and dusty roads where marching might raise clouds of dust that could be seen for miles. Lee knew that if Meade discovered his movements he would either commit to battle or move north of the Rappahannock. But Union pickets reported there were no drum or bugle calls and no smoke from the morning cooking fires coming from the Confederate camps. Word was sent to Meade's headquarters that the rebel army seemed to be moving westward. Meade still did not know what was happening but was very uneasy about these reports. Lee might be moving south to Richmond or he could be moving north trying to turn Meade's flank. Meade also realized that Lincoln was unhappy with his letting Lee escape after Gettysburg. So Meade knew he had to do something.

Throughout the day on October 9, Meade waited on news of Lee's movement. That evening his sent orders for general John Buford’s 1st Cavalry Division to cross the Rapidan at Germanna Ford to find out where the Confederates were. But Buford did not get the orders until the following morning. His cavalry left right away but did not get to the area where the Confederates had been camped before 11:00 a.m.. It wasn't until sunset they made contact with Confederate troops at Morton’s Ford. Meade did not get word of this until the next day, October 11.

At Culpepper Courthouse, Meade was beginning to think Lee was moving north around his flank. But he still had no reports showing this was the case. By the night of October 10, Meade decided a fight in the constricted area of Culpepper was dangerous and might give Lee an advantage. He ordered his entire army north of the Rappahannock. Buford had not received word of the Union army moving north and waited for support from I Corps on the morning of October 11. Instead, he was attacked by Confederate cavalry. The Union and Confederate cavalry units fought throughout the day and by evening Buford had fought his way back across the Rappahannock. But this had distracted the Union cavalry from discovering where Lee's army was. 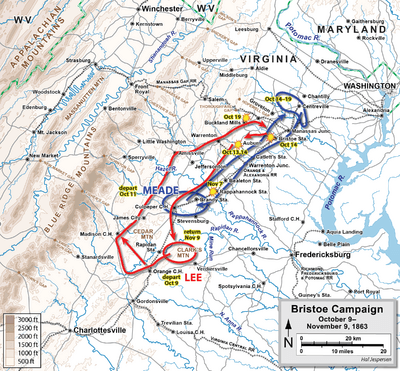 On October 13, in what became known as the First Battle of Auburn, Confederate general J.E.B. Stuart's cavalry was riding ahead of Lee's army. He blundered into Federal troops guarding a supply train. Seeing he was outnumbered, Stuart's cavalry hid in the thick bushes waiting for a chance to attack. But they quickly found themselves surrounded by Union troops who did not know Stuart's men were there. The Confederate cavalry remained in hiding, gathering information about what they saw. The next morning, in what was called the Second Battle of Auburn, Stuart's cavalry fought its way out of the area.

On October 14, 1863 Hill's Corps attacked two Union corps who were retreating north. Hill's mistake was in not ordering any reconnaissance before the attack to see what they were up against. One of Hill's divisions was badly beaten and one artillery battery was lost. After reinforcing his line Hill was not able to make any progress against the Union corps who were dug in behind the Orange and Alexandria Railroad embankment. After beating Hill, the Union army continued on to Centerville, Virginia. Lee was angry with Hill over his mistakes at Bristoe Station. He told hill, "bury your dead and say no more about it!"

After defeat at Bristoe Station and an aborted advance on Centreville, Stuart's cavalry shielded the withdrawal of Lee's army from the vicinity of Manassas Junction. Union cavalry under general Judson Kilpatrick pursued Stuart's cavalry along the Warrenton Turnpike. But they were lured into an ambush near Chestnut Hill and were routed. The Federal troopers were scattered and chased five miles (8 km) in an affair that came to be known as the "Buckland Races".

Across the Rappahannock (November 7)

Lee returned to his old position behind the Rappahannock but left a fortified bridgehead on the north bank. This protected the approach to Kelly's Ford. On November 7, Meade forced passage of the Rappahannock at two places. A surprise attack by general John Sedgwick's VI Corps at dusk overran the Confederate bridgehead at Rappahannock Station. They captured two Confederate brigades (more than 1,600 men) of general Jubal A. Early's division. Fighting at Kelly's Ford was less severe, but the Confederates retreated, allowing the Federals across in force.

All content from Kiddle encyclopedia articles (including the article images and facts) can be freely used under Attribution-ShareAlike license, unless stated otherwise. Cite this article:
Bristoe Campaign Facts for Kids. Kiddle Encyclopedia.