George Gordon Meade (1815-1872) was one of the few Union Army generals in the American Civil War who was born and began his career in a foreign country. He was born in Cadiz, Spain on December 31, 1815. He came to the United States after his family was financially ruined during the Napoleonic Wars. Meade was made commander of the Union Army of the Potomac just before the Battle of Gettysburg. After the Civil War he stayed in the army, serving in the South during the Reconstruction. Meade served as commissioner of Fairmount Park in Philadelphia until his death in 1872.

Meade was born in Cadiz, Spain to American parents, Richard W. Meade and Margaret Coates Meade. His father was an agent for the United States Navy. Richard Meade died in 1828 leaving his family with very little money. The family returned to the United States settling in Philadelphia. In 1831, because his family was still struggling financially, Meade entered the United States Military Academy at West Point. Four years later he graduated 19th in a class of 56.

Meade was commissioned a second lieutenant and served in the Seminole Wars in Florida. He was an artillery officer for a year before resigning in 1837 to become a civil engineer. He reentered the army in 1842 after having difficulty in finding jobs. Meade was a second lieutenant in the Corps of Topographical Engineers when the Mexican–American War broke out in 1846. He was then placed in charge of lighthouse construction and later, surveying the Great Lakes.

At the outbreak of the Civil War, Meade had risen to the rank of captain in the regular army. He was appointed a brigadier general to command a brigade of Pennsylvania volunteers. He was given the task of building several fortifications near Tenallytown, Maryland. It was about this time he gained his nickname "The Old Snapping Turtle" for being short-tempered with junior officers and his superiors. He was especially short with civilians and newspaper reporters. His command was attached to the Army of the Potomac in March 1862. His troops fought in the Battle of Beaver Dam Creek and the Battle of Gaines's Mill. Meade was seriously wounded at the Battle of Glendale. He remained on the battlefield giving orders until a loss of blood from two bullet wounds forced him to leave the field. He recovered in a Philadelphia hospital and returned to duty in September. He led a division of "Pennsylvania Reserves" at the Battle of South Mountain and again three days later on September 17, 1862 at the Battle of Antietam. At Antietam he took temporary command of I Corps after the corps commander was wounded. He participated in the Battle of Fredericksburg and after the battle was made commander of the V Corps. In May 1863, Meade's V Corps protected the important fords on the Rappahannock River at the Battle of Chancellorsville. Despite the Union Army heavily outnumbering the Confederates, the Army of the Potomac was defeated. This led to General Hooker being replaced as commander. On June 28, 1863 Meade was given overall command of the Army of the Potomac.

Having had command of the Army of the Potomac for only three days, and having to deal with a Confederate army which had already invaded Pennsylvania, Meade quickly reorganized his forces. He moved the army towards Gettysburg, Pennsylvania to stop Robert E. Lee's Army of Northern Virginia. 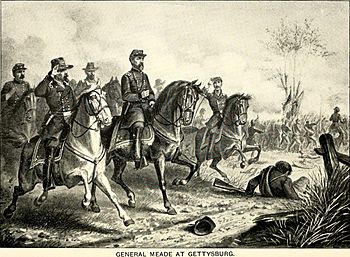 With parts of his army already at Gettysburg, Meade arrived late in the day on July 1. He decided to fight a defensive battle. His army held ground just south of Gettysburg. The next day saw some of the bloodiest fighting with the Union army holding the high ground and Lee's army attacking both flanks. Each attack was thrown back. That evening, Meade held a "council of war" with his officers. All said the army should stay and fight the Confederates. On July 3 the Confederates attacked the Union center with about 13,000 men. They broke through the center of the Union line only to be thrown back again. When Lee told General George Pickett to gather his division together and attack again, Picket replied he no longer had a division. They had been nearly wiped out during Pickett's Charge. At that point Lee realized he had been defeated. On July 4, 1863, following three days of battle at Gettysburg, the two armies watched each other from opposing ridges. Meade sent out skirmishers to probe the Confederate lines. But no order was given to attack. Lee was now concerned with getting his army and all their captured supplies back to Virginia. His army held its position while the more than 10,000 wounded men were moved by wagon train 40 miles (64 km) to Williamsport, Maryland. The train of wagons and ambulances with the wounded was some 17 miles (27 km) long. Meade discovered Lee's army had left the morning of July 5. Meade then ordered his nearly exhausted army to pursue Lee. Since the Potomac River was flooded, Lee's army was delayed in crossing. But by the time Meade's forces reached the Potomac, Lee had already escaped back into Virginia. 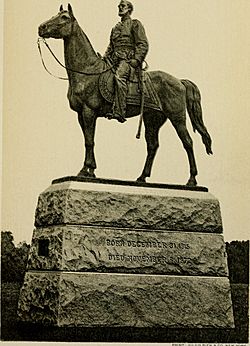 While Meade was proclaimed the "hero of Gettysburg", President Lincoln wasn't satisfied. He had expected Meade to follow and destroy Lee's army, which could have ended the war. Meade offered Lincoln his resignation but Lincoln refused to accept it. On July 7, 1863, Meade was promoted to brigadier general in the regular army. Both the battles of Bristoe Station and Mine Run were undecisive for the Union army under Meade. In the spring of 1864, Meade again offered his resignation when General Ulysses S. Grant became general-in-chief of all Union forces and made his headquarters with the Army of the Potomac. While Meade remained in command, nearly all command decisions were made by Grant. This continued through the Siege of Petersburg after which Meade was promoted to major general. A week later, when Lee surrendered his army to Grant at Appomattox Court House, Meade was not present.

Meade commanded several military departments. One of these was the Department of the South. In the fall of 1872, he came down with pneumonia. He died on November 6, 1872. His funeral became a state affair with President Grant attending. Thousands of people in Philadelphia lined the route of his funeral to say goodbye to the "hero of Gettysburg". On July 18, 1917, by order of the United States Department of War, Camp Meade, Maryland was named in honor of George G. Meade. In 1929, to differentiate it from Fort Meade in South Dakota, the camp was renamed Fort George G. Meade.

All content from Kiddle encyclopedia articles (including the article images and facts) can be freely used under Attribution-ShareAlike license, unless stated otherwise. Cite this article:
George Meade Facts for Kids. Kiddle Encyclopedia.