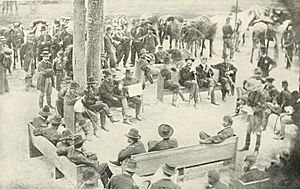 Union staff meeting at Massaponax Baptist Church on May 21, 1864. Grant has his back to the smaller tree with Charles Anderson Dana to his left, while Meade is seated at the far left.

The Overland Campaign was a series of battles in the Eastern Theater of the American Civil War. It took place during May and June of 1864. Union general Ulysses S. Grant wanted to defeat the Confederate Army of Northern Virginia, commanded by Robert E. Lee, and to wikt:capture the Confederate capital of Richmond, Virginia. The battles were some of the bloodiest battles of the war.

In the spring of 1864, Grant had been appointed to command all Union armies. Grant's plan to end the war had several parts. Union General William Tecumseh Sherman's Atlanta Campaign and Grant's Overland Campaign were supported by other campaigns. They were all intended to keep Lee from reinforcing his main army. George Meade was still in (nominal) command of the Army of the Potomac, but there was little doubt Grant was in direct control of the army's movements.

Grant ordered General Franz Sigel to advance down the Shenandoah Valley to prevent reinforcements and supplies from reaching Lee's army. Grant ordered Benjamin F. Butler's Union Army of the James to cut the rail lines between Richmond and Petersburg, Virginia. This interrupted Lee's main supply line. Grant wanted to force Lee to attack even though Lee had no reinforcements and few supplies.

The campaigns were all to start at the beginning of May. The Army of the Potomac crossed the Rapidan River on May 4, moving south towards The Wilderness before Lee could attack them. But Lee attacked while Grant's army was still trying to move through the tangled forest. The Battle of the Wilderness started the campaign.

All content from Kiddle encyclopedia articles (including the article images and facts) can be freely used under Attribution-ShareAlike license, unless stated otherwise. Cite this article:
Overland Campaign Facts for Kids. Kiddle Encyclopedia.