Franz Sigel (November 18, 1824 – August 21, 1902) was a German military officer, revolutionist and immigrant to the United States. In the US he was a teacher, newspaperman, politician, and served as a Union Major general in the American Civil War. His ability to recruit German-speaking immigrants to the Union armies got him the approval of President Abraham Lincoln. But he was strongly disliked by General-in-Chief Henry Halleck and rated overall as a poor leader.

Sigel was born in Sinsheim, Baden (Germany). He attended the gymnasium in Bruchsal. He graduated from Karlsruhe Military Academy in 1843, and was commissioned as a lieutenant in the Baden Army. In 1848 he was a part of the Revolutions of 1848 in the German states. When the revolution failed he fled, eventually immigrating to New York City. There he worked at a number of different jobs. These include a teacher, musician, surveyor and the owner of a cigar store. In 1854 Sigel married Elsie Dulon. Together they had five children. In 1857 he moved to St Louis, Missouri where he was one of the founders of a monthly magazine. He was the superintendent at the German Institute and joined the Republican Party. He attracted German immigrants to the Republican party because of their strong anti-slavery sentiment.

At the start of the Civil War, Sigel volunteered to support Abraham Lincoln and the Union cause. Because of his military experience, he was given command of the Third Missouri Infantry. He recruited many German-Americans to the Union cause with the slogan, "I goes to fight mit Sigel." His commission as Colonel held a date of rank of May 4, 1861. Because he was a key figure in recruiting immigrants to the Union army, President Lincoln had him promoted to Brigadier general two weeks later.

In the meanwhile, he was attached to Brigadier general Nathaniel Lyon's Union Army of the West. Sigel and his soldiers helped put down a riot the St. Louis area. The incident was known as the Camp Jackson Affair. He led a Flanking maneuver at Battle of Wilson's Creek, surprising and attacking the Confederate forces from their rear while Lyon attacked them from the front. On March 8, 1862, at the Battle of Pea Ridge, Sigel commanded two division (military)s in the victory against Major General Earl Van Dorn (CSA). 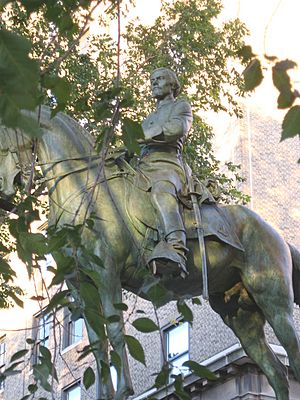 Sigel was promoted to major general after the battle of Pea Ridge. He served as a division commander in the Shenandoah Valley and fought unsuccessfully against Maj. Gen. Thomas J. "Stonewall" Jackson. He commanded a Union corps at the Second Battle of Bull Run.Here he was wounded in the hand.

In early 1863, Sigel lobbied the War Department for more troops. But his requests were refused. In early 1864 he was given command of the Army of West Virginia. In 1864 his army was defeated in the Battle of New Market. This loss and his failure to prevent Confederate attacks in Northern Virginia led to his removal from command. Although he remained in the army until May 1865, he was not given another command.

Career after the Civil War 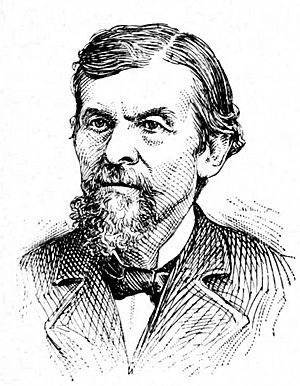 Sigel resigned his commission on May 4, 1865. He worked as editor of the Baltimore Wecker for a short time. He was then a newspaper editor in New York City. He filled a variety of political positions there, both as a Democrat and a Republican. In 1869, he ran on the Republican ticket for Secretary of State of New York. He lost to the incumbent Democrat Homer Augustus Nelson. In May 1871 he became collector of internal revenue, and then in October 1871 register of the city. In 1887, President Grover Cleveland appointed him pension agent for the city of New York. He also lectured, worked in advertising and published the New York Monthly, a German-American magazine, for some years.

Franz Sigel died in New York in 1902 and is buried in Woodlawn Cemetery in The Bronx, New York City.

All content from Kiddle encyclopedia articles (including the article images and facts) can be freely used under Attribution-ShareAlike license, unless stated otherwise. Cite this article:
Franz Sigel Facts for Kids. Kiddle Encyclopedia.