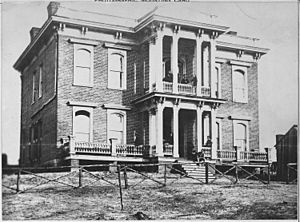 The headquarters for the Corps of Topographical Engineers, ca. 1860-1865

The U.S. Army Corps of Topographical Engineers was established by the United States Congress in 1838. It was made up of only officers who were hand-picked graduates of the United States Military Academy at West Point. Their main purpose was to map and make military surveys for routes to the Pacific. They were at the center of the westward expansion of the United States between the War of 1812 and the American Civil War. They mapped the frontier regions of the West encouraging Americans to move into those areas. They laid out trails, roads, railroad routes and waterways. During the Civil War, the functions of the Corps of Topographical Engineers were transferred to the Army Corps of Engineers.

From 1777 to 1863, topographical engineers were used in the United States Army. In 1813, Congress authorized eight officers to be a part of the general staff. Each was to have the brevet rank and pay of a major in the U.S. Cavalry. They also authorized eight assistants, each with the brevet rank and pay of a captain in the U.S. Infantry. They formed the Topographical Bureau as a branch of the U.S. Army Corps of Engineers.

In 1829, John James Abert, became the head of the Topographical Bureau. In 1838, he used his political influence to persuade Congress to form an independent army unit separate from the Corps of Engineers called the Corps of Topographical Engineers. Informally they became known as “topogs".

Their first priority was to explore the American West to make it accessible. Early on they worked to make the Mississippi and Ohio Rivers navigable. The work of charting these rivers actually started under the Topographical Bureau over a decade before the establishment of the Corps of Topographical Engineers. During the mid-1800s, they worked on floodind issues of major rivers. They designed lighthouses, mapped navigational routes and worked on many other federal projects. The General Survey Act gave them the authority to survey all canals and roads in the United States. They surveyed the National Road that connected the Potomac and Ohio Rivers. This was a main transport path to the West for thousands of settlers.

During the 1840s and 1850s, the Corps was very active. John C. Frémont led several western explorations starting in 1841. He led an exploration of the North Platte River. He next explored west to what is now Pueblo, Colorado. His next exploration was south going through Bent's Fort on the Arkansas River. With Kit Carson as his guide, Fremont began a two year journey that greatly expanded the knowledge of what lay to the west. It took him as far as the Sacramento Valley in early 1846. They were also involved in surveying boundary lines, especially in Texas during the Mexican–American War. Until they were merged with the Corps of Engineers in 1863, they surveyed and built roads bridges and forts for the Union Army during the Civil War.

All content from Kiddle encyclopedia articles (including the article images and facts) can be freely used under Attribution-ShareAlike license, unless stated otherwise. Cite this article:
Corps of Topographical Engineers Facts for Kids. Kiddle Encyclopedia.