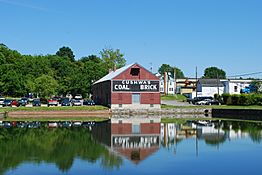 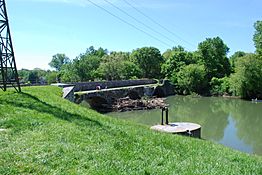 According to the United States Census Bureau, the town has a total area of 1.04 square miles (2.69 km2), all of it land.

The climate in this area is characterized by hot, humid summers and generally mild to cool winters. According to the Köppen Climate Classification system, Williamsport has a humid subtropical climate, abbreviated "Cfa" on climate maps.

There were 960 households, of which 25.9% had children under the age of 18 living with them, 36.7% were married couples living together, 12.9% had a female householder with no husband present, 7.0% had a male householder with no wife present, and 43.4% were non-families. 38.5% of all households were made up of individuals, and 19.8% had someone living alone who was 65 years of age or older. The average household size was 2.12 and the average family size was 2.73.

The town lies on one of the early Native American trails between New York and the Carolinas. In the mid-18th century, tens of thousands of European settlers and pioneer families with their wagons followed the same route on the Great Wagon Road from Pennsylvania to Virginia and points south and west. In 1744, a ferry was established at the present site of Williamsport to carry the traffic across the Potomac River. Today’s travelers make the crossing on Interstate 81 a mile downriver from the town.

The land of present-day Williamsport was previously owned by Otho Holland Williams, a Continental Army officer in the American Revolutionary War, and for whom the town is named.

In 1834, boats using a portion of the newly built Chesapeake and Ohio Canal were able to reach Williamsport from Washington, D.C. The canal itself was extended to Williamsport in 1835. The canal became an important commercial route which connected the area with the lower Potomac River region and the Chesapeake Bay, and later with the Cumberland, Maryland region as the canal construction continued westward. Williamsport became a very popular waterfront town which benefited the economy. In 1873, the Western Maryland Railway extended its line from Hagerstown to Williamsport, in order to gain access to canal traffic. Coal from Cumberland area mines was one of the principal commodities transferred from canal barges to rail cars at Williamsport.

In 1863, during the Civil War, the overflowing flooding waters of the river prevented General Robert E. Lee's army, on its retreat from Gettysburg, from crossing and making it safely into Virginia for several days. A large flood in 1924 caused extensive damage to the canal, which was then permanently shut down.

The town's historic core was added to the National Register of Historic Places as the Williamsport Historic District in 2001.

The town in May 2010 secured Michael Sparks, a previous town consultant and writer of a revitalization feasibility study, as Director of Economic and Community Development to revitalize downtown and attract tourism. Mr. Sparks outlined a revitalization initiative with the acronym of C.A.R.E.

Over a one-year experiment with having a full-time economic development employee hundreds of thousands of grant dollars were secured for projects including handicap accessibility for town buildings, reconstruction of sewage pump stations, a possible bike-and-boat rental facility, and the town was approved as a Heart of the Civil War Heritage Area Target Investment Zone. Bike lanes, bike racks and directional signage were installed to better direct tourists and connect the town with the Chesapeake and Ohio Canal National Historical Park. A new permit process was set up with the Washington County, Maryland permit office, building code enforcement and heavy truck traffic were addressed. Events were coordinated that emphasized revitalization and the downtown merchants. Additionally local youth were honored for community involvement, events were coordinated for town youth and a Boys and Girls Club was created. The changes increased business in Williamsport. The town is part of a regional initiative known as the Canal Towns Partnership. 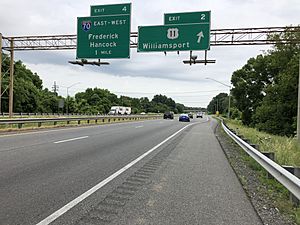 I-81 northbound at the exit for US 11 in Williamsport

The main means of transportation to and from Williamsport are by road. Interstate 81 is the main highway directly serving Williamsport, passing along the town's southeastern border. I-81 continues north towards Harrisburg and south towards Martinsburg. A few miles from Williamsport, I-81 also has an interchange with Interstate 70, which provides access to Baltimore and Pittsburgh. Other highways serving Williamsport include U.S. Route 11, Maryland Route 63 and Maryland Route 68, all of which converge in the center of town.

All content from Kiddle encyclopedia articles (including the article images and facts) can be freely used under Attribution-ShareAlike license, unless stated otherwise. Cite this article:
Williamsport, Maryland Facts for Kids. Kiddle Encyclopedia.