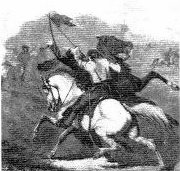 Illustration of a cavalry charge at the Battle of Yellow Tavern

Sheridan started his raid on May 9. Stuart started after him right away. On May 11, they fought on May 11 at Yellow Tavern, six miles north of Richmond. The Confederates defeated several Union attacks. But in the afternoon, General George A. Custer's Michigan Brigade broke through the Confederate center. Near the end of the battle Stuart was mortally wounded by one of Custer's men and died the next day. The Confederates then retreated from the battlefield. The battle, except for Stuart's death, was not of much note. There were a total of about 800 casualties.

All content from Kiddle encyclopedia articles (including the article images and facts) can be freely used under Attribution-ShareAlike license, unless stated otherwise. Cite this article:
Battle of Yellow Tavern Facts for Kids. Kiddle Encyclopedia.