Lebanon is a home rule-class city and the county seat of Marion County, Kentucky, in the United States. The population was 5,539 at the 2010 census. Lebanon is located in central Kentucky, southeast of Louisville. A national cemetery is located nearby.

Lebanon is renowned for its Ham Days Festival and Tractor Show which is held during the last weekend of September. In the 1960s and early 1970s, it was known as an entertainment hotspot, as nationally known acts appeared at Club 68 and the Golden Horseshoe nightclubs.

According to the United States Census Bureau, the city has a total area of 4.4 square miles (11.4 km2), all land.

In historical context, it is important to note that prior to the establishment of the city now known as Lebanon, the nearby town of Georgetown was also named "Lebanon" during its first few years of establishment. It was renamed in 1790 in honor of President George Washington.

Present-day Lebanon was established in 1814 and named for the Biblical Lebanon because of its abundant cedar trees. The founding community traces back to the Hardin's Creek Meeting House, built by Presbyterians from Virginia. It was incorporated as a city on January 28, 1815, and became the county seat of Marion County in 1835. Because of its style and beauty, elegant homes, and flourishing businesses, Lebanon had the reputation of being Kentucky's Philadelphia and was considered for the site of the state capitol.

In the 19th century, Lebanon was one of the stops along the National Turnpike from Maysville to Nashville. In 1819, Henry Clay and Andrew Jackson met here after having crossed paths on their journeys. Many of its brick homes date from the antebellum period, including Hollyhill and Myrtledene Bed and Breakfast. Much of Lebanon's downtown business district was recently placed on the National Historic Register.

A branch of the Louisville & Nashville Railroad was built to Lebanon in 1857, but growth of the town was halted by the Civil War. Three battles were fought nearby, and control over the railroad branch passed between Union and Confederate hands several times. After the death of his brother Tom during a local battle, Confederate John Hunt Morgan's cavalry burned the railroad depot, a hotel, and several residences on July 5, 1863 during the Battle of Lebanon.

Lebanon's Historic Homes and Landmarks Tour is also part of the Kentucky's Civil War Heritage Trail and includes twenty-four listings. On the Civil War Discovery Trail, three landmarks stand out. The Commissary Building, which is the old Sunnyside Dispensary Building, was in place during the Civil War and supplied dry goods and food stuffs to the Union Garrison here. The Shuck building, which is now Henning's Restaurant, was the office of General George H. Thomas, when he gathered an army of several thousand to go to Mill Springs to defend the Cumberland Valley. Myrtledene Bed and Breakfast was where General John Hunt Morgan rode his horse in the house and started up the stairs. General Morgan used the property as his headquarters while he was in Lebanon. On the southern limits of Lebanon is the National Cemetery, where many of the Union Soldiers who fell in the 1862 Battle of Perryville were laid to rest. The cemetery is the site of many military funerals and hosts annual Memorial Day celebrations.

The town rebounded after the war and became a trade center, but declined as railroads became less important to commerce in the 1900s. The tracks were abandoned, then eventually removed by CSX Transportation in the mid-1980s.

In the 1950s, 1960s, and early 1970s, Lebanon was known as an entertainment hotspot, as nationally known acts appeared at The Plantation, Club Cherry, Club 68, and the Golden Horseshoe nightclubs. 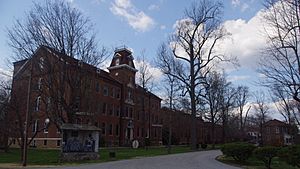 The Loretto Motherhouse in Nerinx, Kentucky

Marion County is the home of Maker's Mark Distillery, a small batch bourbon whiskey distillery that is in Loretto, Marion County, Kentucky and owned by Beam Inc. It is sold in distinctively squarish bottles, which are sealed with red wax. The distillery offers tours, and is part of the American Whiskey Trail and the Kentucky Bourbon Trail. The distillery was listed on the National Register of Historic Places on December 31, 1974, and designated a National Historic Landmark on December 16, 1980, listed as "Burks' Distillery". It was the first distillery in America to be so recognized where the landmark buildings were in active use for distilling.

The Loretto Motherhouse is located in Nerinx, Marion County, Kentucky. A working farm and place of extraordinary natural beauty and historical buildings, it is the residence of active and retired members. Belgian priest Charles Nerinckx (2 October 1761, Herfelingen – 12 August 1824) and three Kentucky frontier women founded the Sisters of Loretto, the first native American order of Roman Catholic nuns, in 1812. A dozen years later the order moved its headquarters to Saint Stephen's farm, now called Nerinx, where Stephen Badin, first priest ordained in the United States, had centered the missionary activity which earned for him the nickname "Apostle of Kentucky". The Loretto Community publishes Loretto Magazine, In Brief, a newsletter of the Education Committee, Loretto Earth News, and the Justice and Peace Newsletter.

Penn's Store is the oldest country store in America being run continuously by the same family. It has been in the Penn family since 1850. Nestled near Marion County's Western border in Boyle County Ky, Penn's Store has become a popular site for visitors seeking living history in an ever-changing, modern world. The store remains today much as it has throughout its past 150+ years. It is not a restored landmark; it is an authentic landmark.

Lebanon hosts the Heart Of Kentucky Bluegrass Music Kickoff in January. Special guests along with local groups perform old favorites while other bluegrass musicians are invited to bring their favorite song for an opportunity to come on stage and perform.

Lebanon holds an annual Ham Days Festival featuring a county ham breakfast, craft and food booths, 2 parades, lots of games and contests, free outdoor concerts, a carnival, a Car Show and Tractor Show, plus much more. Ham Days is sponsored by the Marion County Chamber of Commerce and held during the last weekend of September.

A silent documentary, Our Day, was directed by Wallace Kelly in 1938, about a day in the life of the Kelly family in Lebanon.

Call of the Wildman, an American reality television series that airs on the Animal Planet network films near Lebanon.

Diageo built a $130 million distillery in Lebanon in 2020, the distillery has 30 full-time employees.

In 2013, the Marion County High School women's basketball team won the KHSAA Girl's State Championship. Makayla Epps also won the Herald-Leader trophy for Most Valuable Player in the game. The women's team also had an undefeated season in 2013, going 39–0. They are one of three teams in KHSAA to have an undefeated season.

In 2016, Joe Keith Bickett published "The Origins of the Cornbread Mafia"

In 2017, the Marion County High School boys baseball team made it to the semi-finals for the first time in school history.

Lebanon has a lending library, the Marion County Public Library.

All content from Kiddle encyclopedia articles (including the article images and facts) can be freely used under Attribution-ShareAlike license, unless stated otherwise. Cite this article:
Lebanon, Kentucky Facts for Kids. Kiddle Encyclopedia.