Having previously worked as a hospital orderly in the early 1960s, Sledge achieved his strongest success in the late 1960s and early 1970s with a series of emotional soul songs. In later years, Sledge received the Rhythm and Blues Foundation's Career Achievement Award. He was inducted into the Rock & Roll Hall of Fame in 2005. 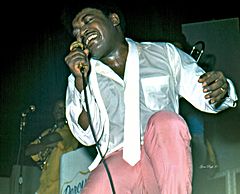 Sledge performing on tour in 1974

Sledge married twice and was survived by his second wife, Rosa Sledge, whom he married in 1980. He had 12 children, three of whom became singers.

Sledge died of liver cancer at his home in Baton Rouge on April 14, 2015, at the age of 73. His interment was in Baton Rouge's Heavenly Gates Cemetery.

All content from Kiddle encyclopedia articles (including the article images and facts) can be freely used under Attribution-ShareAlike license, unless stated otherwise. Cite this article:
Percy Sledge Facts for Kids. Kiddle Encyclopedia.