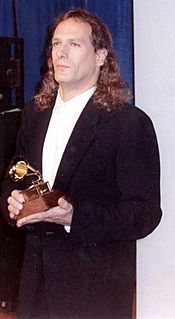 Bolton at the 1990 Grammy Awards

He began singing in hard rock, though he later went to the soft rock styles starting in the late 1980s.

Bolton has made a number of cameo appearances in feature films and television, usually appearing as himself, such as in Meet Wally Sparks and The Nanny. Although he has been rumored to have appeared as an extra in Dune as a "spice-eyed" drummer, Bolton has stated in interviews that it is not him.

In August 2006, Bolton was one of Lucy Lawless's duet partners on the Fox network's program Celebrity Duets, which Simon Cowell's Syco Productions Company produced for the network.

Bolton was a contestant on the eleventh season of Dancing with the Stars. He and his dance partner Chelsie Hightower were the second couple to be eliminated, on September 28, 2010.

In 2015, Bolton starred in a Pizza Hut commercial as himself singing Jingle Bells while the family opens up their pizza order.

Bolton was married to Maureen McGuire, but they divorced. They are the parents of three adult daughters: Isa, Holly, and Taryn. Taryn gave birth to a daughter in October 2010.

Bolton was introduced to actress Nicollette Sheridan in 1992 by adult contemporary/jazz saxophonist Kenny G. Bolton and Sheridan dated until 1995, stopped dating, then reunited in 2005 and became engaged in March 2006; however, it was confirmed in August 2008 that they had broken off their engagement.

In January 2013, Bolton published an autobiography, The Soul of It All: My Music, My Life.

All content from Kiddle encyclopedia articles (including the article images and facts) can be freely used under Attribution-ShareAlike license, unless stated otherwise. Cite this article:
Michael Bolton Facts for Kids. Kiddle Encyclopedia.