Campbellsville is a city in central Kentucky founded in 1817 by Andrew Campbell. It is known for Campbellsville University, Taylor Regional Hospital health care system, its historic downtown, and the proximity to Green River Lake State Park. Campbellsville is the county seat of Taylor County, with a geographic boundary shaped like a heart. Campbellsville celebrated its bicentennial on July 4, 2017.

The city was founded in 1817 and laid out by Andrew Campbell, who had moved there from Augusta County, Virginia. Campbell owned a gristmill and a tavern and began selling lots in Campbellsville in 1814. Campbellsville was designated by the state legislature as the county seat in 1848 after Taylor County was separated from Green County. The city agreed to sell the public square to the county for one dollar so that a courthouse could be built here. 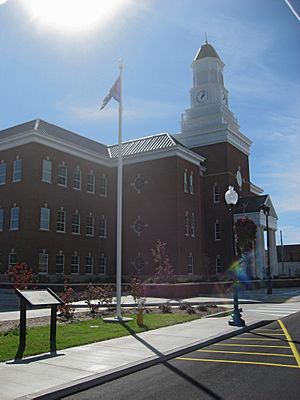 Construction began in 2008 on a new Justice Center because of the demand for a more modern courthouse. in addition, the city built an "official" county jail to avoid the cost of transporting and housing prisoners in neighboring Lebanon in Marion County.

Campbellsville has several historic sites as listed under Taylor County in the National Register of Historic Places listings in Kentucky. The Campbellsville Historic Commercial District includes several blocks of Main Street. The most notable structure in this district is Merchant Tower (formally Merchants Hotel) which has Romanesque architecture. It has been listed individually on the National Register of Historical Places since 1980.

Just north of Campbellsville is the Spurlington Tunnel, once used by local railroads, but which is no longer in service. It is about 1,900 feet long. Approximately one-third of the way in, a shaft leads to the top, where it once vented smoke from steam locomotives.

The climate in this area is characterized by hot, humid summers and generally mild to cool winters. According to the Köppen Climate Classification system, Campbellsville has a humid subtropical climate, abbreviated "Cfa" on climate maps.

Campbellsville University (CU) published its 2016/2017 economic impact report showing an annual impact of $106,482,540. Of that, $42.9 million impact the local economy. The university's operations directly employ and support over 13.26% of all jobs in Taylor County, Kentucky.

Taylor Regional Hospital (TRH) - The expanding healthcare system serves the region of 110,000 people. TRH is one of the area's largest employers. In 2016, TRH served 98,900 patients.

Amazon's fulfillment center, known as SDF1, is located near the technology park.

Campbellsville is home to the Heartland Commerce and Technology Park (HCTP). The park's initial tenant is an automotive components manufacturer, the INFAC Corporation. In June 2017, HCTP received a "Build-Ready" certification to attract new companies.

For decades, employment in the area was dominated by a large textile plant, formerly Union Underwear and since Fruit of the Loom. It closed in 1998. Shortly thereafter, another notable employer closed, the Indiana-based Batesville Casket Company.

In 1969, the booming petroleum business was shut down because of environmental concerns of excess salt water disposal. In 2008, attempts failed to revitalize oil reserves because of water infiltration.

Campbellsville Industries (CI), "The Steeple People (tm)," is the oldest and largest steeple and tower manufacturer in the United States. CI has more than 15,000 installations located throughout the United States and Canada. CI claims the record for the world's largest prefabricated church steeple at 229 ft at the First Baptist Church in Huntsville, Alabama.

Campbellsville is home to the last Druther's (Burger Queen) restaurant in operation.

Campbellsville has a lending library, the Taylor County Public Library.

Campbellsville does have a local airport, the Taylor County Airport (FAA Identifier: AAS). It is 2.5 miles from downtown Campbellsville.

Campbellsville is accessible by two-lane roadways. The closest four-lane roadway is the Bluegrass Parkway.

All content from Kiddle encyclopedia articles (including the article images and facts) can be freely used under Attribution-ShareAlike license, unless stated otherwise. Cite this article:
Campbellsville, Kentucky Facts for Kids. Kiddle Encyclopedia.