Augusta County is a county in the Shenandoah Valley on the western edge of the Commonwealth of Virginia. The second-largest county of Virginia by total area, it completely surrounds the independent cities of Staunton and Waynesboro. Its county seat is Staunton, but most of the administrative services have offices in neighboring Verona.

The county was created in 1738 from part of Orange County and was named after Princess Augusta of Saxe-Gotha. It was originally a huge area, but many of its parts were carved out to form other counties and several states until the current borders were finalized in 1790.

As of the 2010 census, the county's population was 73,750, which represented an increase of more than 34% from 1990. Along with Staunton and Waynesboro, it forms the Staunton–Waynesboro, VA Metropolitan Statistical Area.

Augusta County was formed in 1738 from Orange County, although, because few people lived there, the county government was not organized until 1745. It was named for Augusta of Saxe-Gotha, Princess of Wales and mother of the future King George III of the United Kingdom.

Originally, Augusta County was a vast territory with an indefinite western boundary. Most of what is now West Virginia as well as the whole of Kentucky were formed from it, and it also claimed the territory north and west of those areas, theoretically all the way to the Pacific Ocean.

A series of maps show the formation and division of Augusta County from 1738 through 1791.

Reductions in its extent began in 1770, when its southern part became Botetourt County. In 1776 part of western Augusta County, an area also known as the District of West Augusta, became Monongalia County, Ohio County, and Yohogania County (abolished in 1786). In 1778 the portion of Augusta County west of the Ohio River became Illinois County (abolished in 1784); the northeastern part of what was remained became Rockingham County, and the southwestern part was combined with part of Botetourt County to form Rockbridge County. In 1788 the northern part of the county was combined with part of Hardy County to become Pendleton County. Augusta County assumed its present dimensions in 1790, when its western part was combined with parts of Botetourt County and Greenbrier County to form Bath County.

During the Civil War, Augusta County served as an important agricultural center as part of the "Breadbasket of the Confederacy." The Virginia Central Railroad ran through the county, linking the Shenandoah Valley to the Confederate capital at Richmond. One of the bloodiest engagements fought in the Shenandoah Valley took place on June 5, 1864 at the Battle of Piedmont, a Union victory that allowed the Union Army to occupy Staunton and destroy many of the facilities that supported the Confederate war effort. Augusta County suffered again during General Philip H. Sheridan's "Burning," which destroyed many farms and killed virtually all of the farm animals.

Staunton, the county seat for many years, was incorporated as a city in 1871 and separated from Augusta County in 1902. However, it remained the county seat. 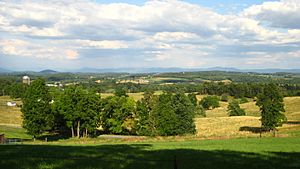 View of Augusta County countryside across the Shenandoah Valley toward the Blue Ridge Mountains.

The county is serviced by Augusta County Public Schools.

According to the 2010 US Census data, below are the populations of the two towns and select unincorporated communities within Augusta County:

The majority of Grottoes is located in Rockingham County. Only seven of the town's 2,668 residents reside in Augusta County.

The independent cities of Staunton and Waynesboro (incorporated as such in 1902 and 1948 respectively) are located within the boundaries of Augusta County, but are not a part of the county, despite Staunton's status as the county seat. Most county administrative offices, however, are located in Verona, rather than in Staunton.

According to the county's 2011 Comprehensive Annual Financial Report, the top employers in the county are:

All content from Kiddle encyclopedia articles (including the article images and facts) can be freely used under Attribution-ShareAlike license, unless stated otherwise. Cite this article:
Augusta County, Virginia Facts for Kids. Kiddle Encyclopedia.