Pendleton County is a county located in the U.S. state of West Virginia. As of the 2010 census, the population was 7,695, making it the fifth-least populous county in West Virginia. Its county seat is Franklin. The county was created by the Virginia General Assembly in 1788 from parts of Augusta, Hardy, and Rockingham Counties and was named for Edmund Pendleton (1721–1803), a distinguished Virginia statesman and jurist. Pendleton County was strongly pro-Confederate during the American Civil War; however, there were pockets of Union support.

By the 1740s, the three main valleys of what became Pendleton County had been visited and named by white hunters and prospectors. One of the hunters, a single man named Abraham Burner, built himself a log cabin about a half mile downstream of the future site of Brandywine in 1745. He was the county's first white settler. A local historian recorded that:

The site ...[was] on the left bank of the river, and near the beginning of a long, eastward bend. From almost at his very door his huntsman's eye was at times gladdened by seeing perhaps fifty deer either drinking from the steam or plunging in their heads up to their ears in search of moss.

By 1747, immigrants were impinging on the (future) borders of Pendleton from two directions: the larger community was mostly Germans moving up the valley of the South Branch Potomac; the lesser consisted mainly of Scotch-Irish moving northwest from Staunton up into the headwaters of the James River. In an April 1758 surprise raid of Fort Seybert and nearby Fort Upper Tract occasioned by the French and Indian War (1754–63), most of the 60 white settlers sheltering there were massacred by Shawnee and Delaware warriors and the forts were burned.

Pendleton County was created by the Virginia General Assembly in 1788 from parts of Augusta, Hardy, and Rockingham Counties and was named for Edmund Pendleton, a distinguished Virginia statesman and jurist. Pendleton County was split between Northern and Southern sympathies during the American Civil War. The northern section of the county, including the enclave in the Smoke Hole community were staunchly Unionist. In June 1863, the county was included by the federal government in the new state of West Virginia against many of the inhabitants' wishes. In fall 1863, Union Brigadier General W.W. Averell swept up the South Branch valley and destroyed the Confederate saltpetre works above Franklin.

At Franklin, the Pendleton County seat, the South Branch of the Potomac River crested at 22.6 feet during the 1985 Election day floods. Flood stage in the shallow riverbed was only 7 feet. Most of the 47 people killed in this incident were in Pendleton and Grant counties, according to the National Weather Service. 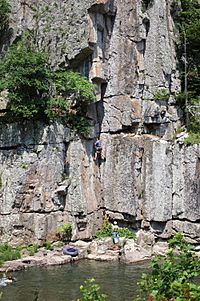 The following sites are listed on the National Register of Historic Places.

All content from Kiddle encyclopedia articles (including the article images and facts) can be freely used under Attribution-ShareAlike license, unless stated otherwise. Cite this article:
Pendleton County, West Virginia Facts for Kids. Kiddle Encyclopedia.