Franklin is a town in Pendleton County, West Virginia, United States. The population was 721 at the 2010 census. It is the county seat of Pendleton County. Franklin was established in 1794 and named for Francis Evick, an early settler.

The Town of Franklin is situated in the Allegheny Mountains on the eastern edge of the Monongahela National Forest and along the South Branch of the Potomac River. This region was populated by Native American cultures for centuries prior to the arrival of English immigrants in the mid-18th century. During the French and Indian War, conflict between the early settlers and Native American populations included two battles at frontier fortifications at Upper Tract and Fort Seybert in 1758, both ten miles distant from the future location of Franklin. The land on which Franklin was laid out was first patented by brothers Francis and George Evick in 1769. 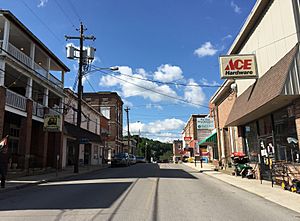 Pendleton County was divided from parts of August, Hardy, and Rockingham Counties (Virginia) by an act of the Virginia General Assembly in 1787. The earliest court sessions in the new county were held at the home of Captain Zeruiah Stratton near the present-day village of Ruddle until Francis Evick offered a part of his land to become a county seat around 1789. Additional lots were divided off of Evick's land to form the new town. On December 19, 1794, the Virginia General Assembly chartered the town of Franklin and recognized it as the seat of Pendleton County. Franklin grew steadily over the first half of the 19th century, becoming a local center of commerce and industry. In 1834, there were two stores, two tanneries, three saddlers, two carpenters, two shoemakers, two blacksmiths, one gunsmith, one tailor, one hat-maker, and one cabinet-maker listed among the town's residents.

At the outbreak of the American Civil War in 1861, Pendleton County voted to uphold Virginia's Ordinance of Secession, despite strong Union sympathies from many of its residents. Localized fighting occurred between northern and southern regiments throughout the war, but the only major battle to impact the Franklin area occurred in May 1862. Following the First Battle of Kernstown, Confederate Major General Thomas J. "Stonewall" Jackson initiated his Valley Campaign to draw attention of the Union Army away from its Peninsula Campaign nearing the Confederate capitol at Richmond. On May 8, 1862, Jackson clashed with Union regiments from West Virginia and Ohio under the command of Brigadier General Robert H. Milroy at the Battle of McDowell (some 30 miles from Franklin). After a day of fighting, the Union forces withdrew from the battle and began retreating towards Franklin, pursued by Jackson for nearly a week. The armies clashed briefly at McCoy's Mill (three miles south of Franklin, now a National Historic Site), but Jackson withdrew and returned to the Shenandoah Valley to continue his campaign.

Franklin did not grow significantly in the years following the American Civil War until the early twentieth century. In 1917, the town's boundaries were expanded, the streets were macadamized, and public water and electricity were brought into the town. However, tragedy struck on April 17, 1924 when a massive fire destroyed the entire business district and caused $500,000.00 (~$6.5 million adjusted for present inflation) in damages. Most of the town's center, its commercial district, and the Pendleton County Courthouse were constructed following the 1924 fire. Another disaster struck the town in 1985. The South Branch of the Potomac River in Franklin crested at 22.6 feet during the 1985 Election day floods. Flood stage at the time in the shallow riverbed was only 7 feet. 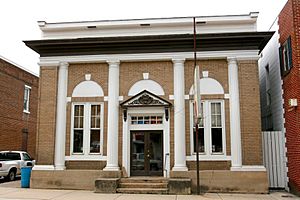 Much of the town was listed on the National Register of Historic Places as the Franklin Historic District in 1986. 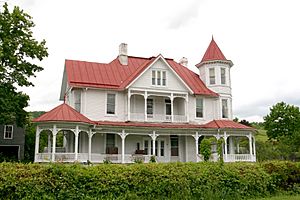 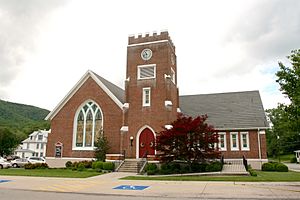 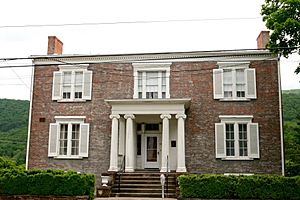 According to the United States Census Bureau, the town has a total area of 0.56 square miles (1.45 km2), all land.

Aside from its historical sites, Franklin and Pendleton County are home to several recreational facilities. Franklin Gorge is a popular rock climbing destination. Franklin is within short distance of several of West Virginia's most celebrated state and national parks, including Seneca Rocks, Spruce Knob, and Smoke Hole Canyon.

There were 313 households of which 18.5% had children under the age of 18 living with them, 44.4% were married couples living together, 7.3% had a female householder with no husband present, 3.5% had a male householder with no wife present, and 44.7% were non-families. 40.9% of all households were made up of individuals and 22.7% had someone living alone who was 65 years of age or older. The average household size was 2.00 and the average family size was 2.68.

The most popular festivals in Franklin are the Treasure Mountain Festival, which takes place annually the third weekend in September, and the annual Spring Fest in May. Both attract visitors from surrounding counties and states.

The climate in this area has mild differences between highs and lows, and there is adequate rainfall year-round. According to the Köppen Climate Classification system, Franklin has a marine west coast climate, abbreviated "Cfb" on climate maps.

All content from Kiddle encyclopedia articles (including the article images and facts) can be freely used under Attribution-ShareAlike license, unless stated otherwise. Cite this article:
Franklin, West Virginia Facts for Kids. Kiddle Encyclopedia.