Petersburg is a city in Grant County, West Virginia, United States. The population was 2,467 at the 2010 census. It is the county seat of Grant County.

Petersburg was founded circa 1745 by Jacob Peterson, who owned the area's first merchandising store. The settlement was incorporated in 1910.

In the 1830 United States Census, the population center of the United States was recorded as being about 9 miles southwest of the town. 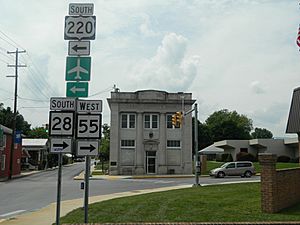 Located near Petersburg (but in Pendleton County) is the Old Judy Church (1836), listed on the National Register of Historic Places since 1976.

According to the United States Census Bureau, the city has a total area of 1.62 square miles (4.20 km2), all of it land.

The climate in this area has mild differences between highs and lows, and there is adequate rainfall year-round. According to the Köppen Climate Classification system, Petersburg has a marine west coast climate, abbreviated "Cfb" on climate maps. 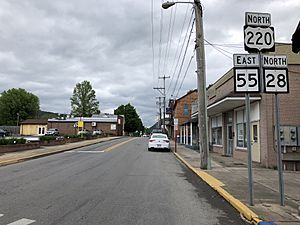 US 220, WV 28 and WV 55 heading northeast towards Moorefield from the center of Petersburg

All content from Kiddle encyclopedia articles (including the article images and facts) can be freely used under Attribution-ShareAlike license, unless stated otherwise. Cite this article:
Petersburg, West Virginia Facts for Kids. Kiddle Encyclopedia.