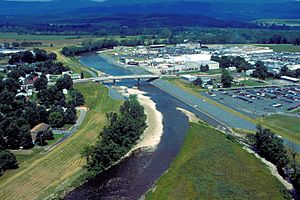 Aerial view of the business district of Moorefield, West Virginia. The U.S. Army Corps of Engineers has constructed levees along the South Fork to protect the town.

Moorefield is situated in the South Branch Valley along the South Branch of the Potomac River. Native Americans populated this area for centuries, farming along the river and hunting in the surrounding mountains. English settlers began arriving in the early 18th century, attracted by the fertile land. This early settlement was centered on the community of Old Fields, which is located about five miles to the north of present-day Moorefield. Conflict between the settlers and Native American populations broke out during the French and Indian War. Two fortifications guarded the South Branch Valley in the vicinity of Moorefield. Fort Buttermilk was erected in 1756 and garrisoned by Captain Thomas Waggoner's Virginia Regiment Company. A second fortress, Fort Pleasant, situated at Henry Van Meter's Farm at Old Fields, guarded the northern side of the valley and was also garrisoned by Captain Thomas Waggoner's Virginia Regiment Company. In the spring of 1756, soldiers from Forts Buttermilk and Pleasant clashed with Shawnee warriors under Bemino (known to the English as Killbuck) at the Battle of the Trough.

The land on which Moorefield was laid out was owned by Conrad Moore. In 1777, the Virginia General Assembly chartered the town of Moorefield in what was then Hampshire County, Virginia (today Hardy County, West Virginia). When Hardy County was separated from Hampshire County by act of the Virginia General Assembly in 1785, Moorefield was chosen as the county seat. Many of the historic houses in Moorefield display vernacular adaptations of Federal and Greek Revival architecture and date to the last quarter of the 18th century and first quart of the 19th century. During the American Civil War, Moorefield was the site of a cavalry engagement between Union Brigadier General William W. Averell and Confederate Brigadier General John McCausland on August 7, 1864.

The climate in this area is characterized by hot, humid summers and generally mild to cool winters. According to the Köppen Climate Classification system, Moorefield has a humid subtropical climate, abbreviated "Cfa" on climate maps.

There were 1,097 households of which 27.5% had children under the age of 18 living with them, 37.5% were married couples living together, 13.8% had a female householder with no husband present, 5.7% had a male householder with no wife present, and 43.1% were non-families. 34.7% of all households were made up of individuals and 15.1% had someone living alone who was 65 years of age or older. The average household size was 2.32 and the average family size was 2.90.

All content from Kiddle encyclopedia articles (including the article images and facts) can be freely used under Attribution-ShareAlike license, unless stated otherwise. Cite this article:
Moorefield, West Virginia Facts for Kids. Kiddle Encyclopedia.