A judge is a person who presides over court proceedings, either alone or as a part of a panel of judges. The powers, functions, discipline, and training of judges vary widely across different jurisdictions. The judge is supposed to conduct the trial impartially and, typically, in an open court. The judge hears all the witnesses and any other evidence presented by the barristers of the case, assesses the arguments of both of the parties, and then issues a ruling on the matter based on his or her interpretation of the law and his or her own personal judgment. In some jurisdictions, the judge's powers may be shared with a jury. 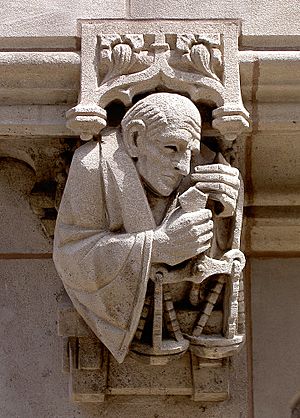 The ultimate task of a judge is to settle a legal dispute in a final and public manner, and uphold the rule of law. Judges exercise significant governmental power. They can order police, military or judicial officials to execute searches, arrests, imprisonments, seizures of property or money, deportations and similar actions. However, judges also supervise that trial procedures are followed, in order to ensure stability, equal treatment and avoid any irrational behaviour. The powers of a judge are checked by higher courts such as appeals courts and supreme courts.

Before the trial, a pre-trial investigation collecting the facts has been conducted by police officials, such as police officers and coroners, prosecutors or public procurators. The court usually has three main legally trained court officials: the judge, the prosecutor and the defence attorney.

Judges may work alone in smaller cases, but in criminal, family and other significant cases, they work in a panel. Judges are often assisted by law clerks, official's and by bailiffs or similar with security.

Judge as an occupation 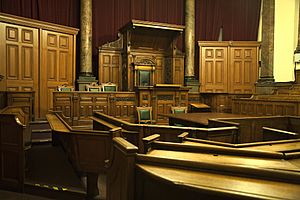 There are both volunteer and professional judges. A volunteer judge, such as an English magistrate, is not required to have legal training and is unpaid. A professional judge is required to be legally educated; in the U.S., this generally requires a degree. Judges are often appointed by the head of state. In some U.S. jurisdictions judges are elected in a political election. Equal treatment (impartiality) is often considered important for rule of law.

Judges must be able to research and process sizeable lengths of documents and other case material, understand complex cases and possess a thorough understanding of the law and legal procedure, which requires excellent skills in logical reasoning, analysis and decision-making. Excellent writing skills are also a necessity, given the authority of the documents written. Judges work with people all the time; by the nature of the job, good dispute resolution and interpersonal skills are a necessity. Judges are required to have good moral character, i.e. there must be no history of crime.

A variety of traditions have become associated with the rank or occupation. Gavels (a ceremonial hammer) are used by judges in many countries, to the point that the gavel has become a symbol of a judge. In many parts of the world, judges wear long robes (often in black or red) and sit on an elevated platform during trials (known as the bench). 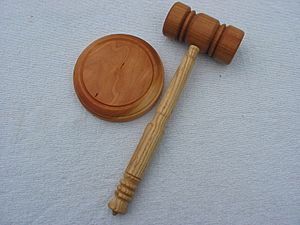 In some countries, especially in the Commonwealth of Nations, judges wear wigs. The long wig often associated with judges is now saved for ceremonial occasions, although it was part of the standard dress in previous centuries.

All content from Kiddle encyclopedia articles (including the article images and facts) can be freely used under Attribution-ShareAlike license, unless stated otherwise. Cite this article:
Judge Facts for Kids. Kiddle Encyclopedia.