Rule of law facts for kids 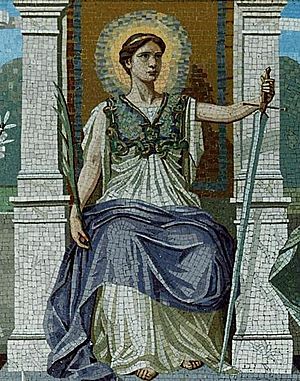 Mosaic representing both the judicial and legislative aspects of law. The woman on the throne holds a sword to chastise the guilty and a palm branch to reward the meritorious. Glory surrounds her head, and the aegis of Minerva signifies the armor of righteousness and wisdom

Rule of law is a legal maxim that suggests that no one is above the law and governmental decisions must be made only by applying known legal and moral principles. The Rule of Law limits the powers of Government by judicial defense of laws and the Constitution which is based on recognized basic legal values, established in international law. The Rule of Law is meant to prevent dictatorship and to protect the rights of the people.

The Rule of Law is especially important as an influence on the economic development in developing and transitional countries. Constitutional economics is the study of government spending, which, in many transitional and developing countries, is completely controlled by the executive. The standards of constitutional economics can be used during annual budget process. The availability of an effective court system, to be used by the civil society in courts in situations of unfair governmental distribution of national money is a key element for the success of the rule-of-law in developing countries.

To date, the term “rule of law” has been used primarily in the English-speaking countries, and it needs to be fully clarified even with regard to such well-established democracies as, for instance, Sweden, Denmark, France, Germany, or Japan as well as to other countries. It is important to create a bridge of mutual understanding between the English language doctrine of the rule of law and the originally German doctrine of Rechtsstaat, translated into other languages of continental Europe as État de droit (Fr.), Estado de derecho (Sp.), Stato di diritto (It.), and Правовое государство (Ru.). Rechsstaat can be translated into English as “legal state” or "constitutional state". Rule of law is also a main purpose of Council of Europe for solidarity and international peace.

All content from Kiddle encyclopedia articles (including the article images and facts) can be freely used under Attribution-ShareAlike license, unless stated otherwise. Cite this article:
Rule of law Facts for Kids. Kiddle Encyclopedia.