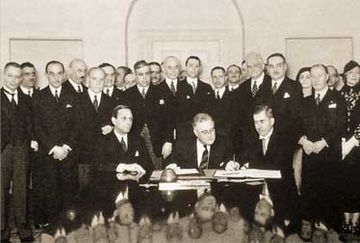 Signing of the Roerich’s Pact (in centre: Franklin Delano Roosevelt)

The Roerich Pact is a treaty on Protection of Artistic and Scientific Institutions and Historic Monuments, signed by the representatives of 21 states in the Oval Office of the White House on 15 April 1935. As of January 1, 1990, the Roerich Pact had been ratified by ten nations: Brazil, Chile, Colombia, Cuba, the Dominican Republic, El Salvador, Guatemala, Mexico, the United States, and Venezuela. It went into effect on 26 August 1935. The Government of India approved the Treaty in 1948, but did not take any further formal action. The Roerich Pact is also known as Pax Cultura ("Cultural Peace" or "Peace through Culture"). The most important part of the Roerich Pact is the legal recognition that the protection of culture is always more important than any military necessity.

Russian painter and philosopher Nicholas Roerich (1874-1947) started the modern movement for the defense of cultural objects, in order for a “Peace of Civilizations”.

Nicholas Roerich was born on October 9, 1874, in St. Petersburg. He became a successful painter. One of his paintings was purchased by Nicholas II of Russia.

After 1918, Roerich left Russia. In 1923, the Roerich Museum was founded in New York. Presently, the Roerich Museum is located in Manhattan, at the corner of 107th Street and Riverside Drive. Finally, Roerich settled down in the Kulu Valley in Himachal Pradesh in the Himalayas. He died on December 13, 1947.

President Franklin D. Roosevelt had a decisive influence on the process of signing of this treaty by all nations of the American continent. Incidentally, Roosevelt kept in his private rooms a bust of Roerich.

The Roerich Pact was the basis for the United Nations “International Convention for Protection of Cultural Values in the Event of Armed Conflict” signed in 1954. But not all of the ideas of the Roerich Pact are fully implemented in international law, especially the preference of the preservation of cultural values over military necessity. 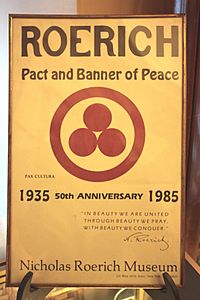 50 years of the Roerich Pact 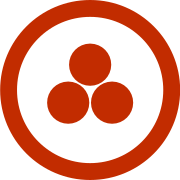 The Roerich Pact proposed a flag to identify protected objects – the Banner of Peace, which was a white cloth containing a red ring and three red circles inscribed in it. The sign symbolized a unity of the past, present and future into the ring of eternity. Ideas from the Pact were reflected in Roerich’s art. The Banner of Peace symbol is shown in many paintings of Nicholas Roerich.

The Roerich Pact is not only an international treaty. It contains legal ideas about a new type of state. The state budget should include money spent on culture, art and education. These expenses must be larger than military expenses. This is the legal recognition that the protection of cultural objects is more important than any military necessity. Roerich thought that caring for future generations was an important reason for constitutional states to exist.

U.S. President Franklin D. Roosevelt, in the speech upon the signature of the 'Roerich Pact' Treaty, said, "In opening this Pact to the adherence of the Nations of the world, we are endeavoring to make of universal application one of the principles vital to the preservation of modern civilization. This Treaty possesses a spiritual significance far deeper than the text of the instrument itself." The Roerich Pact was an important step towards the future development of a new legal culture. The provisions of Roerich’s concept are based on the idea that the primary duty of the state is to preserve the national culture. The ideas of the Roerich Pact are still not fully implemented in international law. Some people think that the 21st century is a good time to implement these ideas.

All content from Kiddle encyclopedia articles (including the article images and facts) can be freely used under Attribution-ShareAlike license, unless stated otherwise. Cite this article:
Roerich’s Pact Facts for Kids. Kiddle Encyclopedia.