Nicholas Roerich; October 9, 1874 – December 13, 1947) – known also as Nikolai Konstantinovich Rerikh (Russian: Никола́й Константи́нович Ре́рих) – was a Russian painter, writer, archaeologist, theosophist, philosopher, and public figure, who in his youth was influenced by a movement in Russian society around the spiritual. He was interested in hypnosis and other spiritual practices and his paintings are said to have hypnotic expression.

Born in Saint Petersburg, Russia, to a well-to-do notary public father of Baltic German ancestry and a Russian mother, he lived in various places around the world until his death in Naggar, Himachal Pradesh, India. Trained as an artist and a lawyer, his main interests were literature, philosophy, archaeology, and especially art. Roerich was a dedicated activist for the cause of preserving art and architecture during times of war. He earned several nominations for the Nobel Peace Prize long list. The so-called Roerich Pact was signed into law by the United States and most nations of the Pan-American Union in April 1935. 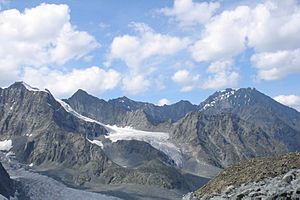 Altai. Peaks and passes named in honor of the Roerich family.

Vice President of the United States Henry A. Wallace was a frequent correspondent and sometime advocate of Nicholas Roerich's teachings. 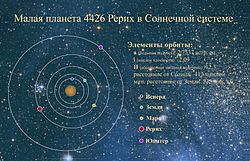 Roerich's biography and his controversial expeditions to Tibet and Manchuria have been examined recently by a number of authors, including two Russians, Vladimir Rosov and Alexandre Andreyev, American (Andrei Znamenski), and the German Ernst von Waldenfels.

H.P. Lovecraft refers numerous times to the "strange and disturbing paintings of Nicholas Roerich" in his Antarctic horror story At the Mountains of Madness.

The minor planet 4426 Roerich in the Solar System was named in honor of Roerich.

In June 2013 during Russian Art Week in London, Roerich's Madonna Laboris sold at auction at Bonhams shop for £7,881,250 inc. buyer's premium, making it the most valuable painting ever sold at a Russian art auction.

All content from Kiddle encyclopedia articles (including the article images and facts) can be freely used under Attribution-ShareAlike license, unless stated otherwise. Cite this article:
Nicholas Roerich Facts for Kids. Kiddle Encyclopedia.