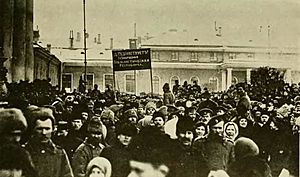 Protests in the street of Petrograd 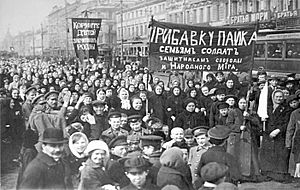 Putilov workers protesting in the streets 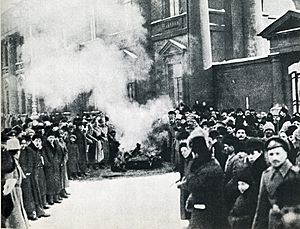 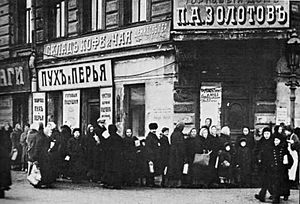 The queue at the grocery store in Petrograd. 1917

Industrialisation had already spread from Petrograd (now Saint Petersburg) in August of 1917 and other cities. When Russia lost the Crimean War in 1856 against England and France, it became obvious that complete economic and social changes of the empire were necessary. Large reforms followed, including the abolition of serfdom in 1861, judicial reform in 1864 and the establishment of national government groups, called Semstwos, in 1864. Also, this strategy aimed to encourage industrial growth.

Russia went through an economic crisis during the Crimean War. The Tsar, Russia's emperor, did not keep his country up to date with new weapons and machines. After the war, he tried to change this and increased the industrial capacity of Russia. This was accomplished with national growth in industry. However, this was very expensive and cost the Russian people a lot of money.

The economic, social and cultural change was mostly in cities with a modern way of living. To change a country like Russia and get ready to develop more modern industry, new laws were made to increase the ability of regional leaders to do work. The cultural modernization, to which also the emergence of a journalistic public belonged, ran out with all slavophilen return flows on a go-west, up to the Rezeption and most independent developments of the new styles within the ranges of the literature and art. An intelligence in such a way specified enstand, which was for reforms unlocked and less and less ready to be able to be limited in its public acting of a pervasive state. It would be from today's viewpoint wrong to equate the Inteligenz and opposition only quite had intelligently and in a revolutionary manner “not the same meaning.

Of Russian national economy it was at present around the year 1916 still in a so high agriculturally that it could not give a revolution without the farmers. From demographic explosion sinking agrarian productivity findings were confronted to the old, still from a fewer time coming scenario of a vicious circle, which pointed Moscow at least in the region on a market-focused region in Russia.

Agrarian social protest was usually spontaneous and short-lived - not only in Russia. The farmers returned again to their hut, if they had taken themselves, which they wanted. Like that it was in the hot autumn of the yearly 1905, and such a scenario took place just as in the late summer of the yearly 1917 again. It remained completely calm after beginning of war in the year 1914. Since the large majority of the recruits came from villages, there was here hardly still someone, which could itself have raised against the authority.

With all that the question remained, why farmers revolted against their direct gentlemen, but this never together with intelligence, had done. Only this new connection, between the farmers in the rural regions and the inhabitants of the cities, lent revolutionary quality to the agrarian social protest. To all appearances the outbreak of the revolution with long-term changes has to do.

Defeats in the First World War

The war brought Russia losses of more than a million dead. The war had begun, as in all European states, with a high national morale. It was coined/shaped for the Zarenreich, however, after the turn at the east front with the battle of Gorlice Tarnow of the year 1915 to a series of sensitive defeats. The legitimacy of the autocratic tsarist house Romanow was weakened further by the fact that Nikolaus II had personally taken command of the armed forces and thus each further retreat and every single defeat suffered would damage the reputation of the regime.

All this long and medium-term disintegrative and conflict-laden developments accepted, under the additional load of the war, a new quality. In synchronischer Verschlingung its effect on the displeasure multiplied workers and farmers. The Aufwallung of national unanimity (Burgfrieden), which it in the August of the yearly 1914 also in tsarist Russia gave, held not for a long time. At the latest in the September of the yearly 1915, when the Zar sent the parliament once more home, the tensions solidified themselves to contrasts, which hardly still permitted a compromise under keeping of the internal peace.

Authority loss of the Tsar and embittering the opposition

Tsar Nicholas II instructed the murder of political opponents and installed at short notice an informer system generally speaking for the country. In the year 1915 he took over the military instruction of the troops during the First World War. Then after, the tsarist army faced disgraceful defeats. At the Petersburger Blutsonntag it let its secret police and the military shoot at demonstrators, suffocated each rebellion in the germ. Finally, Nicholas II had to permit a choice nevertheless to the Duma. Nicholas II ignored the advice of his former Minister of Finance Sergei Juljewitsch Witte, which snapped him and recommended comprehensive reforms. Arbitrarily the condition broke several times. The beginning of the First World War represented the beginning of the end. The frequent defeats, hunger emergencies and the catastrophic supply situation of the population led in the long run to the revolution. In the worst cases, they agreed upon Burgfrieden, which should secure only a keeping still of the opposition within the war, broke quite fast. The increasing protest readiness of the population shows up in the Duma, which were dominated by representatives of the middle class and the aristocracy. In the Duma formed since 1915 the progressive block, which reflected embittering over the autocratic policy of Nicholas II. The progressive block was the strongest parliamentary opposition since the revolution of 1905.

All content from Kiddle encyclopedia articles (including the article images and facts) can be freely used under Attribution-ShareAlike license, unless stated otherwise. Cite this article:
February Revolution Facts for Kids. Kiddle Encyclopedia.