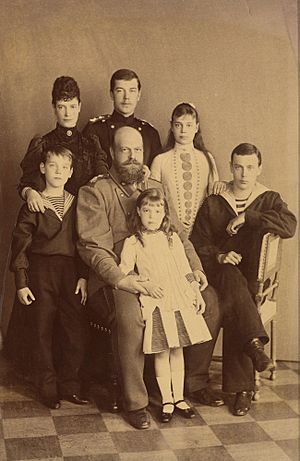 Alexander III with his wife and children

Alexander Alexandrovich Romanov (Alexander III, 10 March 1845 – 1 November 1894), was Tsar of the Russian Empire from 13 March [O.S. 1 March] 1881 until his death on 1 November [O.S. 20 October] 1894. He changed some of the liberal laws made by his father, Alexander II. Alexander III had six children. His son Nicholas II of Russia became the next Tsar.

All content from Kiddle encyclopedia articles (including the article images and facts) can be freely used under Attribution-ShareAlike license, unless stated otherwise. Cite this article:
Alexander III of Russia Facts for Kids. Kiddle Encyclopedia.