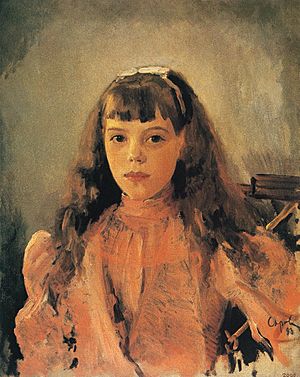 A portrait of Grand Duchess Olga Alexandrovna in 1893 by Valentin Serov.

Grand Duchess Olga Alexandrovna of Russia (О́льга Алекса́ндровна Рома́нова; Olga Alexandrovna Romanova) (13 June [O.S. 1 June] 1882 – 24 November 1960) was the youngest child of Emperor Alexander III of Russia. Her older brother was Tsar Nicholas II. She was not close to her mother, Empress Maria Feodorovna. She was warmer towards her father, and they shared secrets and enjoyed time together. In 1901, she married Duke Peter Alexandrovich of Oldenburg. They separated in 1916. Olga married commoner Nikolai Kulikovsky, whom she had loved from 1903. After the Romanov family were destroyed in the Russian Revolution of 1917, she ran away to the Crimea with her mother, husband, and children, where they lived in great danger. Her brother and his family, including Olga's niece Grand Duchess Anastasia, were murdered by communists. After she escaped from Russia in 1919, Olga was often visited by people who claimed to be her dead relatives. She met Anna Anderson, the best-known Anastasia impostor, in a famous visit to Berlin in 1925. She died when she was 78. Olga is often seen as the last Grand Duchess of Imperial Russia.

All content from Kiddle encyclopedia articles (including the article images and facts) can be freely used under Attribution-ShareAlike license, unless stated otherwise. Cite this article:
Grand Duchess Olga Alexandrovna of Russia Facts for Kids. Kiddle Encyclopedia.