Alexander I of Russia facts for kids

Alexander I of Russia (Russian: Александр I Павлович, Aleksandr I Pavlovich) (23 December [O.S. 12 December] 1777 – 1 December [O.S. 19 November] 1825), also known as Alexander the Blessed (Russian: Александр Благословенный, Aleksandr Blagoslovennyi) was Emperor of Russia from 23 March 1801 to 1 December 1825 and the first Russian King of Poland from 1815 to 1825. He was also the first Russian Grand Duke of Finland and Lithuania.

He was born in Saint Petersburg to Grand Duke Paul Petrovich, later Emperor Paul I, and Maria Feodorovna, daughter of the Duke of Württemberg. He succeeded to the throne after his father was murdered, and ruled Russia during the Napoleonic Wars.

His sudden death in Taganrog, under allegedly suspicious circumstances, caused the spread of the rumours that Alexander did not die in 1825, but disappeared to live the rest of his life in anonymity.

On 9 October 1793, Alexander married Louise of Baden, known as Elisabeth Alexeyevna after her conversion to the Orthodox Church. He later told his friend Frederick William III that the marriage, a political match devised by his grandmother, Catherine the Great, regrettably proved to be a misfortune for him and his wife. Their two children of the marriage died young. 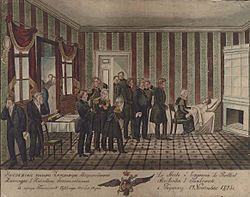 Death of Alexander I in Taganrog (19th century lithograph. 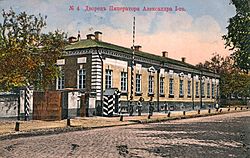 Alexander I Palace in Taganrog, where the Russian Emperor died in 1825.

Tsar Alexander I became increasingly suspicious of those around him, especially after an attempt was made to kidnap him when he was on his way to the conference in Aachen, Germany.

In the autumn of 1825 the Emperor sailed to the south of Russia due to the increasing illness of his wife. During his trip he caught a cold which developed into typhus from which he died in the southern city of Taganrog on 19 November (O.S.)/ 1 December 1825. His wife died a few months later as the emperor's body was transported to Saint Petersburg for the funeral. He was interred at the Sts. Peter and Paul Cathedral of the Peter and Paul Fortress in Saint Petersburg on 13 March 1826.

The unexpected death of the Tsar far from the capital caused rumours that his death and funeral were staged so he could spend the rest of his life in solitude. Some say the former emperor became a monk in Pochaev Lavra or Kievo-Pecherskaya Lavra or elsewhere. A mysterious hermit, Feodor Kuzmich, (or Kozmich) emerged in Siberia in 1836, died near Tomsk in 1864 and was eventually glorified as a saint of the Orthodox Church. Many people, including some historians, have theorized that he was Alexander I under an assumed identity. While there are testimonies that "Feodor Kozmich" in his earlier life might have belonged to a higher level of society, claims that he was Alexander I were never proved.

Alexander I was the godfather of future Queen Victoria of the United Kingdom who was christened Alexandrina Victoria in honour of the tsar.

All content from Kiddle encyclopedia articles (including the article images and facts) can be freely used under Attribution-ShareAlike license, unless stated otherwise. Cite this article:
Alexander I of Russia Facts for Kids. Kiddle Encyclopedia.