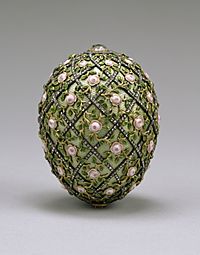 A Fabergé egg is one of the jewelled eggs made by Peter Carl Fabergé and his company between 1885 and 1917.

The most famous are those made for the Russian Tsars Alexander III and Nicholas II. They were Easter gifts for their wives and mothers, and are called the 'Imperial' Fabergé eggs. The House of Fabergé made about 50 eggs, of which 43 have survived.[2] Two more were planned for Easter 1918, but were not delivered, due to the Russian Revolution. 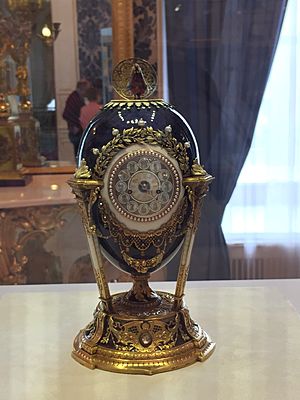 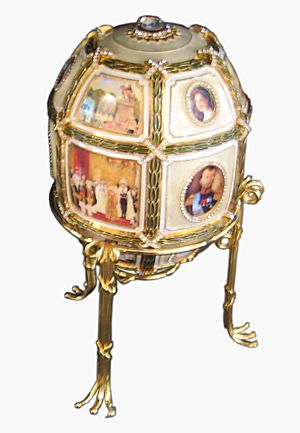 The first Fabergé egg was crafted for Tsar Alexander III, who had decided to give his wife, the Empress Maria Fedorovna, an Easter egg in 1885, possibly to celebrate the 20th anniversary of their betrothal. Although there is no official record of the Tsar's inspiration for it, many believe that he was moved by an egg owned by the Empress’s aunt, Princess Vilhelmine Marie of Denmark, which had captivated Maria’s imagination in her childhood and of which the Tsar was well aware. Known as the Hen Egg, the very first Fabergé egg is crafted from a foundation of gold. Its opaque white enameled "shell" opens to reveal a matte yellow-gold yolk. This in turn opens to reveal a multicolored gold hen that also opens. The hen contained a minute diamond replica of the imperial crown from which a small ruby pendant was suspended, but these last two elements have been lost.

Maria was so delighted by the gift that Alexander appointed Fabergé a "goldsmith by special appointment to the Imperial Crown" and commissioned another egg the next year. After that, Peter Carl Fabergé was apparently given complete freedom for the design of future imperial Easter eggs, and their designs became more elaborate. According to Fabergé family lore, not even the Tsar knew what form they would take—the only requirements were that each contain a surprise, and that each be unique. Once Fabergé had approved an initial design, the work was carried out by a team of craftsmen, among them Michael Perkhin, Henrik Wigström and Erik August Kollin.

After Alexander III's death on 1 November 1894, his son, Nicholas II, presented a Fabergé egg to both his wife, Alexandra Fedorovna, and his mother, the Dowager Empress Maria Fedorovna. Records have shown that of the 50 imperial Easter eggs, 20 were given to the former and 30 to the latter. Eggs were made each year except 1904 and 1905, during the Russo-Japanese War.

Following the revolution and the nationalization of the Fabergé workshop in St. Petersburg by the bolsheviks in 1918, the Fabergé family left Russia. The Fabergé trademark has since been sold several times and several companies have retailed egg-related merchandise using the Fabergé name. The Victor Mayer jewelry company produced limited edition heirloom quality Fabergé eggs authorized under Unilever's license from 1998 to 2009. The trademark is now owned by Fabergé Limited, which makes egg-themed jewellery.

In 2015 the owners of this trademark announced the creation of a new "Fabergé" egg, one styled by them as belonging to the "Imperial Class" of eggs and therefore the first Imperial-Class egg in 100 years: the Fabergé Pearl egg is to be sold in Qatar following a five-day exhibition some time in 2017. A spokesperson for the brand said it expected the egg to fetch at least two million US dollars, possibly much more. Despite its designation as "Imperial", it has no connection to Imperial Russia and instead has become closely tied to wealthy Arab ruling families of various Gulf Nations. Its motif has been described as "scalloped", but the patterns of its curves and lines are also clearly derived from the girih and arabesque of Islamic interlace patterns, and each of its six vertical segments includes a stylized pointed dome and associated pendentives reminiscent of the onion dome and ceiling of an Arabic mosque.

Below is a list of the eggs made for the Russian imperial family.

All content from Kiddle encyclopedia articles (including the article images and facts) can be freely used under Attribution-ShareAlike license, unless stated otherwise. Cite this article:
Fabergé egg Facts for Kids. Kiddle Encyclopedia.