Monhegan is a plantation in Lincoln County, Maine, United States, about 12 nautical miles (22 km) off the mainland. The population was 75 at the 2000 census. The plantation comprises its namesake island and the uninhabited neighboring island of Manana. The island is accessible by scheduled boat service from Boothbay Harbor, New Harbor and Port Clyde. It was designated a National Natural Landmark for its coastal and island flora in 1966.

The name Monhegan derives from Monchiggon, Algonquian for "out-to-sea island." European explorers Martin Pring visited in 1603, Samuel de Champlain in 1604, George Weymouth in 1605 and Captain John Smith in 1614. The island got its start as a British fishing camp prior to settlement of the Plymouth Colony. Cod was harvested from the rich fishing grounds of the Gulf of Maine, then dried on fish flakes before shipment to Europe. A trading post was built to conduct business with the Indians, particularly in the lucrative fur trade. It was Monhegan traders who taught English to Samoset, the sagamore who in 1621 startled the Pilgrims by boldly walking into their new village at Plymouth and saying: "Welcome, Englishmen."

On April 29, 1717, Monhegan was visited by the Anne, a pirate ship of the snow type. The Anne had originally been captured off the Virginia Capes in April by the pirate Samuel Bellamy in the Whydah, which wrecked in a storm on the night of April 26, 1717, off of Cape Cod. The Anne made it through the storm with another captured vessel, the Fisher (which was soon abandoned and the pirates aboard her transferred to the Anne). The pirates, led by Pirate Bonita, arrived at Monhegan on April 29, and waited for the Whydah, for the pirates had not seen or heard about the Whydah wrecking in the storm of the night of April 26. The pirates eventually realized the Whydah was lost, and proceeded to attack vessels at Matinicus Island and Pemaquid (now Bristol). The pirates outfitted for their own uses a small 25-ton sloop that the pirates had captured off Matinicus, one that formerly belonged to Colonel Stephen Minot. They abandoned all the other vessels (including the Anne) they had captured and most of their prisoners at Matinicus on or about May 9, 1717, on Minot's sloop.

Despite success as a fishing and trade center, Monhegan would be caught in the conflict between New England and New France for control of the region. During King Philip's War, dispossessed English settlers from the mainland sought refuge on the island before being relocated elsewhere along the coast. During King William's War, the island was captured for the French in 1689 by Baron de Saint-Castin. He destroyed the fishing fleet and burned the buildings, with many inhabitants escaping to Massachusetts. But even during periods when Monhegan was abandoned, its convenient offshore harbor remained a stopover destination for ships. The end of the French and Indian War in 1763 brought peace to the area, and on September 4, 1839, Monhegan was incorporated as an island plantation.

In 1824, a conical stone lighthouse was built on the island by order of Congress and President James Monroe. Damaged by storms, it was replaced in 1850 by the present 48 foot (14.6 m) granite tower, with a fog bell station built in 1855 on nearby Manana Island. The island's 1,000 acres (400 ha) of good land encouraged agriculture, with potatoes the chief crop. But fishing was always the most important industry, whether locally or at the Grand Banks. Today, it still dominates Monhegan’s economy. From October 1 through June, fishermen harvest lobsters from the only lobster conservation area in the state of Maine.

The beginnings of the art colony on Monhegan date to the mid-19th century; by 1890, it was firmly established. Two of the early artists in residence from the 1890s, William Henry Singer (1868–1943) and Martin Borgord (1869–1935), left Monhegan to study at the Académie Julian in 1901. Among many early members who found inspiration on the island were summer visitors from the New York School of Art and the Pennsylvania Academy of the Fine Arts, such as Robert Henri, Frederick Waugh, George Bellows, Edward Hopper and Rockwell Kent.

Later members of the artist colony have included Jay Hall Connaway, Abraham Bogdanove, Andrew Winter, Reuben Tam, Frances Kornbluth, Elena Jahn and Jamie Wyeth. The 150-foot (50 m) northside cliffs at Blackhead have drawn the interest of Monhegan artists, including Kent, Hopper, and Kornbluth. The Monhegan Museum celebrated more the continuing draw of the island for artists in a 2014 exhibit entitled, “The Famous and the Forgotten: Revisiting Monhegan’s Celebrated 1914 Art Exhibition.”

There were 46 households out of which 13.0% had children under the age of 18 living with them, 32.6% were married couples living together, 4.3% had a female householder with no husband present, and 54.3% were non-families. Of all households 47.8% were made up of individuals and 4.3% had someone living alone who was 65 years of age or older. The average household size was 1.63 and the average family size was 2.24.

Sites of interest and outdoor activities

The village of Monhegan on Monhegan Island, with Manana Island in the background 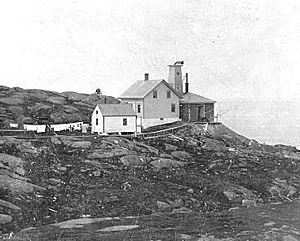 The former Coast Guard fog signal station on Manana Island, across a narrow passage from Monhegan

Summer months bring artists and tourists on several daily ferries. Visitors arrive at the ferry landing or on a beach in the village precinct. The village includes a church, private homes, hotels, art studios, private homes for rent and a few small stores, including one that sells fresh fish/lobster. Much of Monhegan is uninhabited and open for exploration on 17 miles (27 km) of hiking trails, which lead to high cliffs overlooking the sea. Inland paths lead through woods, including the Cathedral Woods.

The hill above the village is the site of the Monhegan Island Light, which offers a view of the village, the harbor, Mañana Island, and across the sea to the west. Adjacent to the lighthouse is the Monhegan Museum, which is open middays from late June through September; the museum houses artifacts, reflecting the island's history.

The island is on the Atlantic flyway and is a stopover for migrating birds and the birdwatchers who come seasonally to observe them.

All content from Kiddle encyclopedia articles (including the article images and facts) can be freely used under Attribution-ShareAlike license, unless stated otherwise. Cite this article:
Monhegan, Maine Facts for Kids. Kiddle Encyclopedia.