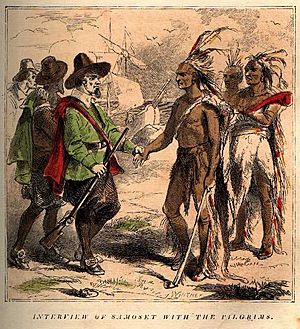 "Interview of Samoset with the Pilgrims", book engraving, 1853

Samoset (ca. 1590–1653) was the first Native American to speak with the Pilgrims in Plymouth Colony. On March 16, 1621, the people were very surprised when Samoset walked straight into Plymouth Colony where the people were living. He greeted them in English. Samoset said he had learned some of the language from some English fishermen that came to Maine.

Samoset was member of the Wampanoag tribe that lived in Maine. He was an important man within his tribe. Samoset talked with the leaders of Plymouth Colony. A few days later he came back with Squanto, an Indian leader who also spoke English.

Samoset is also sometimes called Somerset. The name Somerset may have been given by the English men whom came from Somerset in England. Capt. Levett met Samoset, along with other Native American leaders, in 1624 in the harbor of present-day Portland, Maine.

This is part of an account of the first meeting with Samoset by the people of Plymouth Colony:

This story was adapted for an episode of "The Mayflower Voyagers", of the Peanuts television miniseries This is America, Charlie Brown.

Samoset appeared in William Bradford: The First Thanksgiving, 1992 direct-to-video episode of Animated Hero Classics. He was voiced by Michael Howard.

The Samoset Council of the Boy Scouts of America (located in northern Wisconsin) is named after Samoset.

All content from Kiddle encyclopedia articles (including the article images and facts) can be freely used under Attribution-ShareAlike license, unless stated otherwise. Cite this article:
Samoset Facts for Kids. Kiddle Encyclopedia.