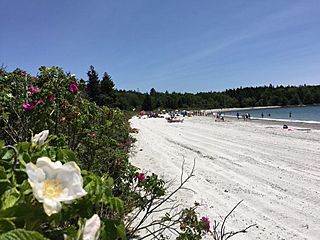 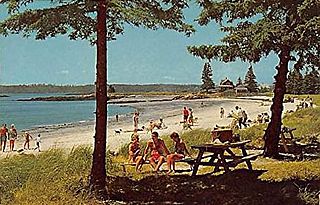 A photo of Pemaquid Beach from the 60's or 70's shortly after the public purchase from the town.

New Harbor is a small scenic coastal village in the town of Bristol, in Lincoln County, Maine, United States. In 2019, the town of Bristol, and in-turn New Harbor was a finalist in the Reader's Digest award for "America's Nicest Place." Bristol and New Harbor were also nominated for and won the "Nicest Place in Maine Award" by Reader's Digest. In New Harbor you will find famous scenic historical sites such as the Pemaquid Point Lighthouse, which is found on the back of the Maine state quarter, and Fort William Henry. New Harbor also sports a large white sand public beach known as Pemaquid Beach, that sits on the calm Atlantic waters of Johns Bay.

The village's lobster fishermen and "Back Cove" were featured on an episode of the Discovery Channel's Sunrise Earth. The community was also used as a filming location for the 1999 film Message in a Bottle, with some scenes filmed at Shaw's Wharf. In 1922 the silent film The Seventh Day, starring Richard Barthelmess, was filmed in New Harbor.

One cannot forget the endless hiking and nature preserves that are available for public exploration. One such important public Wildlife Refuge is the Rachel Carson Salt Pond Preserve in New Harbor. One can go for a 1.1-mile walk on the 78-acre Salt Pond Preserve, which starts on the north side of Route 32 along the shore and ventures West into the preserve's woods. Activities include hiking and climbing as well as coastal activities such as tidal pool searching and sea glass gathering. The Rachel Carson Salt Pond Preserve was one of legendary scientist and environmentalist Rachel Carson's favorite spots, and inspired some of the research for her book, The Edge of the Sea.

All content from Kiddle encyclopedia articles (including the article images and facts) can be freely used under Attribution-ShareAlike license, unless stated otherwise. Cite this article:
New Harbor, Maine Facts for Kids. Kiddle Encyclopedia.