Bristol, known from 1632 to 1765 as Pemaquid ( today a village within the town) is a town in Lincoln County, Maine, United States. The population was 2,755 at the 2010 census. A fishing and resort area, Bristol includes the villages of New Harbor, Pemaquid, Round Pond, Bristol Mills and Chamberlain. It includes the Pemaquid Archeological Site, a U.S. National Historic Landmark. During the 17th and early 18th century, New France defined the Kennebec River as the southern boundary of Acadia, which put Bristol within Acadia.

Once territory of the Wawenock (or Walinakiak, meaning "People of the Bay") Abenaki Indians, early Bristol was one of the most important and embattled frontier settlements in the province. Beginning with seasonal fishing, as early as 1625 the English established at Pemaquid Point a year-round trading post for fur trading. In 1631, the area was granted as the Pemaquid Patent by the Plymouth Council to Robert Aldsworth and Gyles Elbridge, merchants from Bristol, England.

A village and palisade fort were constructed.

In 1632, Pemaquid was raided and plundered by the pirate Dixie Bull.

The Great Colonial Hurricane on August 15, 1635 sank the galleon Angel Gabriel while anchored off the settlement, drowning some crew and passengers.

In 1664, the Duke of York (the future King James II) claimed Pemaquid was within his patent, which also included Sagadahoc and recently acquired New Amsterdam. To help anglicize the latter into New York City, Governor Sir Edmund Andros had some of its Dutch inhabitants transported to Pemaquid, now called Jamestown for its royal owner. By 1665, the village had approximately 30 houses.

During King Philip's War, in 1676 Indians attacked and burned English settlements up the coast, including Pemaquid. The following year, a new wooden defense called Fort Charles was built.

During King William's War—the first of four French and Indian Wars—Fort Charles and the village were attacked and destroyed in 1689 by the French from Castine, Maine. The inhabitants of Pemaquid were either killed or taken prisoner. 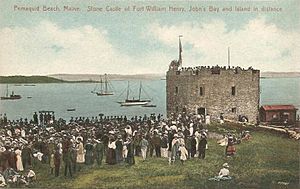 Replica of Fort William Henry in 1909

By 1692, the English regained control of the region, and Sir William Phipps ordered construction of Fort William Henry, named after King William III of England. This time built of stone.

On August 14–15, 1696, the famous Pierre Le Moyne d'Iberville captured and destroyed the fort along with a combined force of French and Indians from present-day Castine. Commander of the fort, Captain Pascoe Chubb surrendered the fort. Iberville killed three of the soldiers and sent the other ninety-two back to Boston. In response to this raid Benjamin Church was sent from Boston to attack Acadia.

In early May 1717, a sloop under the command of a Captain Carr was captured by ten pirate on a 25-ton sloop (formerly owned by a Colonel Stephen Minot) in Pemaquid. The pirate sloop had come from Monhegan to the south, where on April 29, the Snow (a type of two masted vessel) Anne arrived. The Anne had originally been captured off the Virginia Capes in April by the pirate Samuel Bellamy in the Whydah, which wrecked in a storm on the night of April 26, 1717 off of Cape Cod. The Anne made it through the storm with another captured vessel, the Fisher (which was soon abandoned and the pirates aboard her transferred to the Anne). The pirates arrived at Monhegan on April 29, and waited for the Whydah, for the pirates had not see or hear about the Whydah wrecking in the storm of the night of April 26. The pirates eventually realized the Whydah was lost, and proceeded to attack vessels in the area, including Matinicus Island (which is where the sloop the pirates used at Pemaquid was captured from). The attack at Pemaquid was described in a deposition as follows:

...[the pirates] went after Capt. Carr's sloop, lying at Pemaquid, which they alsoe took a little distance from said Pemaquid, but finding the Mast and Bowspreat not serviceable [to repair the snow] they left her there, and brought the Master thereof aboard the Snow then at Menhagen [Monhegan]...

The pirates soon left the area, abandoning all the other vessels (including the Anne) they had captured and most of their prisoners at Matinicus on or about May 9, 1717 on Minot's sloop.

During Father Rale's War, the location was a rendezvous for Natives and French to return inhabitants of Pemaquid and vicinity that they had taken prisoner during the war.

Colonel David Dunbar, Surveyor-General of the King's Woods, rebuilt the fort in 1729-1730, renaming it Fort Frederick. He renamed the town Harrington after the Earl of Harrington, who had helped arrange the 1729 Treaty of Seville.

During King George's War, Fort Frederick withstood two attacks in 1747, but in 1759 was decommissioned at the end of the French and Indian Wars.

In 1775, the town dismantled the fort to prevent it from becoming a British stronghold during the Revolutionary War. The state acquired the site in 1902, and in 1908 rebuilt the tower of Fort William Henry under guidance of historian John Henry Cartland, using many original stones. In 1993, the site was designated a National Historic Landmark.

On June 21, 1765, the town was incorporated as Bristol, named after the home port of the Pemaquid Patent proprietors.

During the War of 1812, the waters off Pemaquid Point saw the capture of HMS Boxer by the USS Enterprise on September 5, 1813. The town would set off land to create Nobleboro in 1788, Bremen in 1828, Damariscotta in 1848 and South Bristol in 1915. Today, Bristol is a popular tourist destination.

There were 1,309 households, of which 18.6% had children under the age of 18 living with them, 53.2% were married couples living together, 7.0% had a female householder with no husband present, 3.1% had a male householder with no wife present, and 36.7% were non-families. 30.9% of all households were made up of individuals, and 17% had someone living alone who was 65 years of age or older. The average household size was 2.09 and the average family size was 2.55.

All content from Kiddle encyclopedia articles (including the article images and facts) can be freely used under Attribution-ShareAlike license, unless stated otherwise. Cite this article:
Bristol, Maine Facts for Kids. Kiddle Encyclopedia.