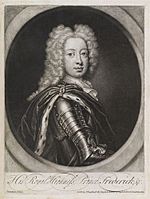 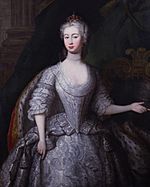 Frederick, Prince of Wales, born Frederick Louis; (1 February 1707 – 31 March 1751) was the son of George II And Queen Caroline of Ansbach. He was the father of King George III. He and his parents had arguments often. He died in 1751 after a lung injury. His son was his heir.

All content from Kiddle encyclopedia articles (including the article images and facts) can be freely used under Attribution-ShareAlike license, unless stated otherwise. Cite this article:
Frederick, Prince of Wales Facts for Kids. Kiddle Encyclopedia.