Cliveden is the name of a large house in Buckinghamshire near London, England. There have been three houses on this site. The first house was built in 1666 and burnt to the ground in a fire in 1795. A new house was built but this one also burnt down in a fire in 1849. The house which can be seen today was made in 1851 by Sir Charles Barry, an architect.

The house is now used as a hotel.

Cliveden House sits in a large garden and woodland, (375 acres). The garden contains many statues and fountains made from stone as well as areas of flowers. Cliveden is very close to the River Thames.

Cliveden means "valley among cliffs" and refers to the valley which cuts through part of the estate, east of the house. 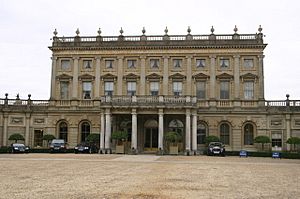 The present house is a blend of the English Palladian style and the Roman Cinquecento. The Victorian three-storey mansion sits on a high brick terrace (visible only from the south side) which dates from the mid-17th century.

The exterior of the house is rendered in Roman cement, with terracotta additions. The roof of the mansion is meant for walking on, and there is a circular view, above the tree-line, of parts of Buckinghamshire and Berkshire including Windsor Castle to the south.

The nearby 100-foot (30m) clock tower was added in 1861. As a functioning water tower it still provides water for the house today. It is rendered in Roman cement like the rest of the house, and features four clock faces, and a half open staircase on its north side.

The original Cliveden maze, commissioned by Lord Astor in 1894, has undergone major restoration after having lain overgrown and inaccessible since the 1950s. It was replanted with 1,100 six-foot-tall yew trees covering an area of one-third of an acre (1.2 hectares) and opened to the public in 2011.

The Octagon Temple, situated 200 feet above the Thames, was originally designed as a gazebo and grotto but was later converted by the 1st Lord Astor to become the family chapel. The chapel was also adapted into the final resting place for the Astors. Its interior and dome are decorated with colorful mosaics representing religious scenes.

The pagoda in the water garden was made for the Paris Exposition Universelle of 1867 and was purchased by the 1st Lord Astor.

Many famous and important people have lived at Cliveden. Some of these are:

Cliveden is the location or inspiration for scenes in the following film and TV productions.

All content from Kiddle encyclopedia articles (including the article images and facts) can be freely used under Attribution-ShareAlike license, unless stated otherwise. Cite this article:
Cliveden Facts for Kids. Kiddle Encyclopedia.