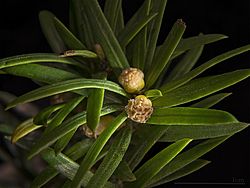 A Yew is a coniferous tree. The name is most used for species of the genus Taxus, or for other members of the coniferous family Taxaceae.

All species of yew contain highly poisonous alkaloids known as taxanes. All parts of the tree except the arils (red 'fruits') contain the alkaloid.

The arils are edible and sweet, but the seeds are dangerously poisonous. Unlike birds, the human stomach can break down the seed coat and release the taxanes into the body. This can have fatal results if yew 'berries' are eaten without removing the seeds first.

The seeds and leaves will kill cattle and horses, but deer can break down the poisons and will eat yew foliage freely. In the wild, deer browsing of yews is often so extensive that wild yew trees are restricted to cliffs and steep slopes inaccessible to deer. The foliage is also eaten by the larvae of some Lepidopteran insects including Willow Beauty.

Yews are slow growing and can be very long-lived, and reach heights of 1-40 m, with trunk diameters of up to 4 m. They have reddish bark, spear-shaped flat, dark-green leaves 1-4 cm long and 2-3 mm broad, arranged spirally on the stem, but with the leaf bases twisted to align the leaves in two flat rows either side of the stem.

The seed cones are highly modified, each cone containing a single seed 4-7 mm long partly surrounded by a modified scale which develops into a soft, bright red berry-like structure called an aril, 8-15 mm long and wide and open at the end.

The arils are mature 6-9 months after pollination, and are eaten by thrushes, waxwings and other birds, which disperse the hard seeds undamaged in their droppings.

The male cones are round, 3-6 mm diameter, and shed their pollen in early spring. Yews are mostly dioecious, but occasional individuals can be variably monoecious, or change sex with time.

All of the yews are very closely related to each other, and often described together as Taxus baccata.

Where are the found

Phylogeny of the Taxaceae and Cephalotaxaceae

The name is most prominently given to any of various coniferous trees and shrubs in the genus Taxus which grow in various places in the world:

The name also is used for any of various coniferous plants in the families Taxaceae and Cephalotaxaceae:

Various coniferous plants in the family Podocarpaceae, which are superficially similar to other yews, are also known by this name:

All content from Kiddle encyclopedia articles (including the article images and facts) can be freely used under Attribution-ShareAlike license, unless stated otherwise. Cite this article:
Yew Facts for Kids. Kiddle Encyclopedia.