Bonnie Prince Charlie was the Jacobite pretender to the thrones of England, Scotland, and Ireland. This claim was as the eldest son of James Francis Edward Stuart, and grandson of James II and VII.

Charles is perhaps best known as the leading the unsuccessful Jacobite uprising of 1745. He led a rebellion which ended in a heavy defeat at the Battle of Culloden. That ended the Jacobite cause. Charles's escape from Scotland after the uprising made him a romantic figure of heroic failure. The Skye Boat Song remembers him.

He lived, and died, in Rome, where his father had been given a home by Clement XI. 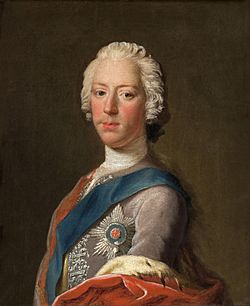 The lost portrait of Charles Edward Stuart by Allan Ramsay, 1745

All content from Kiddle encyclopedia articles (including the article images and facts) can be freely used under Attribution-ShareAlike license, unless stated otherwise. Cite this article:
Charles Edward Stuart Facts for Kids. Kiddle Encyclopedia.