Sound of Arisaig facts for kids

The Sound of Arisaig Lochaber, Scotland, separates the Arisaig peninsula to the north from the Moidart peninsula to the south. At the eastern, landward end, the sound is divided by Ardnish into two sea lochs. Loch nan Uamh lies to the north of Ardnish, Loch Ailort to the south. There are a number of small islands in the sound, of which Eilean nan Gobhar and Samalaman Island, both near to Glenuig on the south shore, are the largest. 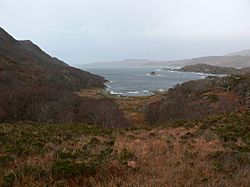 The sound is a marine Special Area of Conservation.

Arisaig, Ardnish and the Sound inspired venues in the "Ian and Sovra" series of children's novels by Elinor Lyon, according to a letter of 24 June 2005 depicted on her page.

All content from Kiddle encyclopedia articles (including the article images and facts) can be freely used under Attribution-ShareAlike license, unless stated otherwise. Cite this article:
Sound of Arisaig Facts for Kids. Kiddle Encyclopedia.